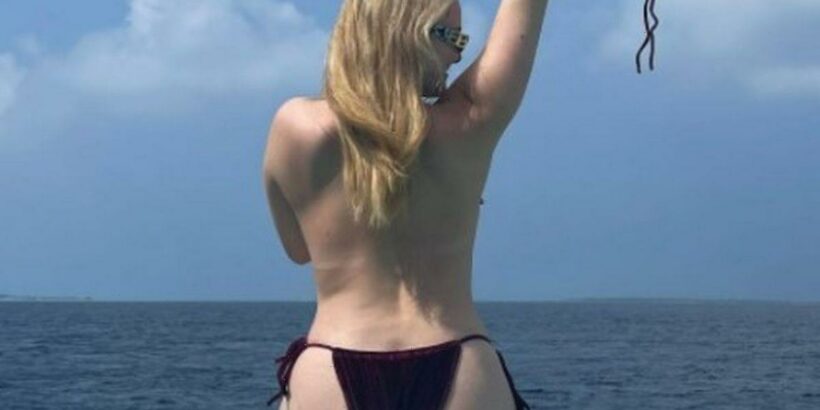 Holly Ramsay went topless as she shared several snaps with her family to celebrate International Women's Day on Tuesday.

In one image, the 21 year old, who recently marked one year of sobriety, was seen with her back to the camera as she dangled her bikini top in her hand.

Making the most of her idyllic getaway, the daughter of Gordon Ramsay sat at the edge of the infinity pool as she looked out to her epic sea view.

Holly also shared a few snaps with her sisters, and in one was seen laughing at Tilly Ramsay as she sang dramatically on a countertop with a microphone. In another image, Holly and Tilly were joined by older sister Megan as they posed for a selfie from the beach while wrapped up in warm clothing.

There was also a post with her mum Tana, who was dressed in a low-key black ensemble as she looked at the lens in a photo taken while on holiday.

"I'm so grateful to be surrounded by such hard-working & inspirational women #internationalwomensday," she added.

In December, Holly celebrated one year of sobriety as she opened up about the decision to give up alcohol during her "lowest" point last year.

"Today marks one year without alcohol," her statement began. "This is not something I thought I would ever say at the age of 21. However, by 21 (nearly 22), I never thought I would've been through half of what I have."

Holly continued: "I choose to take a break from alcohol because it wasn't improving my mental health – which for me, comes first."

Giving further context to her situation, she added: "This time last year I was at my lowest, and I was scared, but I made a decision to take control of what I could – and that meant removing alcohol from my life," the 21 & Over with Holly host confessed. "Living without alcohol has helped me feel better and more present both mentally and physically.

"Don't get me wrong, I've had a year of high highs and low lows, but I'm grateful I have myself the chance to work through them consciously rather mask my feelings (good and bad) with a drink," she concluded.

For all the latest showbiz stories, sign up for OK! 's daily newsletter here.