For Flee, composer Uno Helmersson was tasked with creating a score that mirrored the sense of loss felt throughout the film. He listened to the interviews between director Jonas Poher Rasmussen and his co-writer “Amin,” who is also the subject of the film, and decided that the music should follow the emotional state of Amin.

Flee takes place as Amin is about to marry his husband Kasper. Amin decides to share a traumatic story about his hidden past, which he has never told anyone before. Recreated in animation, Amin shares the story of his perilous escape from his home country as a refugee.

While the more serious areas of the film would normally have the music drop out, leaving silence to accentuate the moment, Helmersson’s wanted to create soft, hollow sound instead. His goal was not to focus on the serious nature of the moment, but rather the complex emotional journey that Amin would take in those moments. 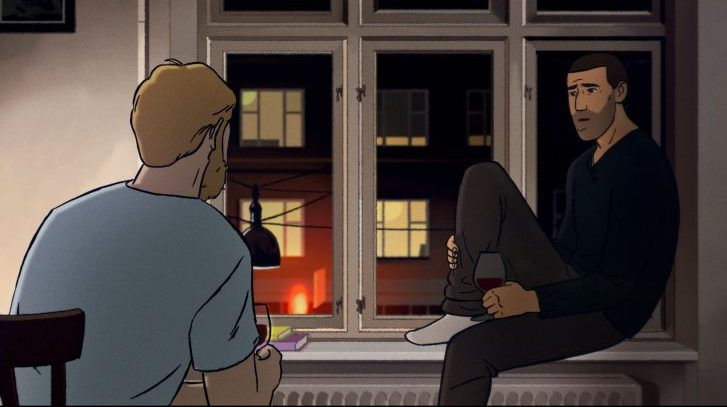 DEADLINE: What were the early discussions with director Jonas Poher Rasmussen, in terms of the score?

HELMERSSON: Well, I think he heard my music before, so he was pretty familiar with the style that I work in. After I got the material and listened to the interview, quite directly, I felt that the music should emphasize [Amin’s] inner journey, his emotional way, because in the way he talked and the way he expressed himself, you can hear the agony.

I think that was what Jonas had in mind also, because the whole story is with animation and the whole storytelling is emphasizing his story. You can follow the story and, together with the music, that takes us into his emotional world. I think that glues it together really well. So, I would say that the main idea was to find a way to illustrate his emotions on his actual his journey and the relief he feels when he tells the true story for the first time ever.

DEADLINE: I know that you used a lot of string instrumentation in the score, is that something you do normally or something you chose specifically to get the right tone?

HELMERSSON: I think it’s a bit of both. I mean, of course you have your sound, but I think that the main thing is trying to work with the music like a web, or like braids actually, you’re just braiding it together. I’m a string instrumentalist myself and I really like working with strings because it’s so expressive. You can play so quietly and there’s so much that you can do with a string instrument that is hard to take down to the piano in the case, because the tone is there but you just have different dynamics on it.

I think that was kind of a natural way of me to work with Flee. Some of the sounds or the soundscapes you hear in the music is actually me playing with mallets on a demolished piano frame and pulling fishing line, and doing different kind of things. It’s about how you work with instruments, how you play on it. And I think that is one of the things that I also like to experiment with. What if we just tune down the violin, so it’s almost not playable and see what happens? I try to create those kinds of things, because I wanted to find the emotional things but it’s also trying to find the emptiness, because when you lose something you feel empty. And I was trying to create that sound of emptiness, which I think you can sense in some of the musical soundscapes that you hear. The kind of the hollow emptiness and the feeling of loss in the sound.

‘Spider-Man: No Way Home’ Review: The Most Exciting, Surprising, Emotional Spidey Of Them All