Chris Hemsworth's Marvel co-stars aren't the only ones reacting to the actor's recent fitness photo over the weekend.

Hulk Hogan, who Hemsworth is set to portray in an upcoming biopic, also took a moment on Monday to comment on the 37-year-old's Instagram picture.

In the snapshot, Hemsworth is seen shirtless and lifting a massive wheel. He teased in the caption of the pic, "Cheat day today. Decided to treat myself to this extra large donut, gosh it’s heavy."

Meanwhile, the WWE wrestler said of Hemsworth on Twitter: "He’s already there! He’s ready BROTHER!!!" Hogan then jokingly asked, "But is he good looking enough to play me lol,lol,lol. HH."

In addition to the comment, Hogan, 67, shared several side-by-side photos of the stars.

Earlier this year, it was revealed that Hemsworth would be portraying Hogan in a movie about the performer and reality star's life.

Of the film, Hemsworth said in a July interview with Games Radar for its “Total Film” series, "This movie is going to be a really fun project," he shared (via Comic Book). "As you can imagine, the preparation for the role will be insanely physical. I will have to put on more size than I ever have before, even more than I put on for Thor. There is the accent as well as the physicality and the attitude."

Currently, Hemsworth is getting into shape to play the god of thunder in his fourth standalone movie, "Thor: Love and Thunder," and eighth Marvel film overall. 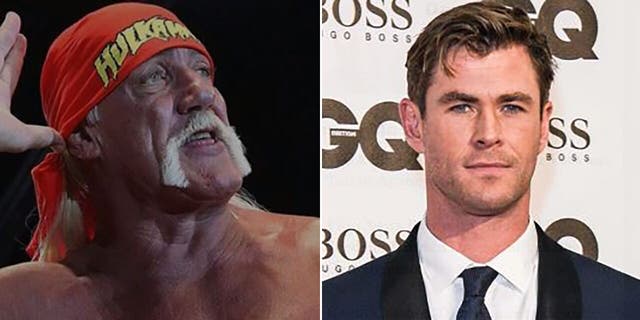 Hulk Hogan, who actor Chris Hemsworth is set to portray in an upcoming biopic, took a moment to comment on the star’s recent workout photo.
(AP, File, Getty)

After Hemsworth posted the pic, his co-star Chris Pratt teased: “Hey bud, Just heard from my trainer and he needs you to stop working out because since we’re gonna be in the same movie and everything he doesn’t want me to stand next to you if you look like that so I’m gonna need you to put on 25 lbs real quick cool thanks.”

Not to be outdone in terms of funny comments, Hemsworth responded to Pratt, 41, by implying that his cut figure in the image is simply the result of a photo filter.

"Don’t worry mate we can just both use the same fancy filter that’s been applied here,” he said. “It’s called instashred.”