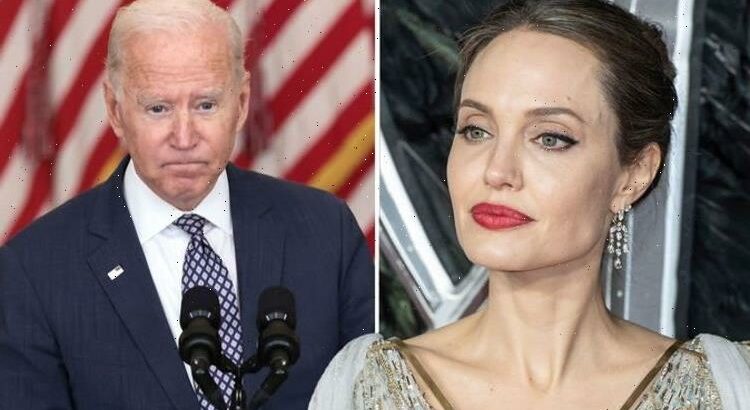 Angelina Jolie has said she is “ashamed” by the manner of America cutting ties with Afghanistan after 20 years of war. The actress expressed her fears about women and young girls in the country having their social progress stripped away, as the Taliban seized control once again this month.

The United States Armed Forces are scheduled to be fully withdrawn from Afghanistan by 31 August 2021.

Angelina, an actress, activist and a Special Envoy of the U.N. High Commissioner for Refugees, expressed her thoughts in her latest opinion piece with Time.

She wrote: “I believed that we were doing the right thing, that we stood shoulder to shoulder with Afghans, and that we were fighting in a noble cause.

“As we fade away from Afghanistan, it is hard to hold on to that trust.”

The mother-of-six added that giving up on the idea of a peace agreement with the Afghan Government is “a betrayal and a failure impossible to fully understand”.

She penned: “I think of injured American servicemen and women I met at Ramstein Air Base – some who’d lost limbs fighting the Taliban— who told me how proud they felt to be a part of helping the Afghan people gain basic rights and freedoms.”

Angelina went on to discuss the difficult situation for women in the country, particularly now the Taliban were back in control.

She noted that in the past year alone, over a hundred people had been killed in attacks targeting school girls.

“I think of all the Afghan children and teenagers, now living in fear about the future,” she added.

“We face a new refugee crisis, on top of record global displacement, with nearly a quarter of a million Afghans displaced within the country since May— 80 per cent of them women and girls.”

Angelina said she was “in awe” of the Afghans who had worked to improve their country over the past 20 years and hoped they would be safe as they contribute to their country.

She concluded her post adding that any Afghan government “should be judged” on their attitude to terrorism, behaviour on human rights and whether Afghan women and girls maintain the rights they have gained.

On Monday, President Joe Biden defended his decision to end the war.

He said that they had so far made “significant process” and had already evacuated more than 18,000 people since July, and approximately 13,000 since the military lift began on August 14.

Biden added: “As we continue to work the logistics of evacuation, we’re in constant contact with the Taliban, working to ensure civilians have safe passage to the airport.

“We’re particularly focused on our engagements on making sure every American who wants to leave, can get to the airport.”

He confidently said that they will get any American who wants to come home back to safety.

It is reported that he will address the nation again on Sunday afternoon to provide an update on the withdrawal from Afghanistan as well as the response to Hurricane Henri.

Biden is believed to have met with his national security team to hear, security, intelligence and diplomatic updates on the ongoing situation in the country’s capital Kabul.