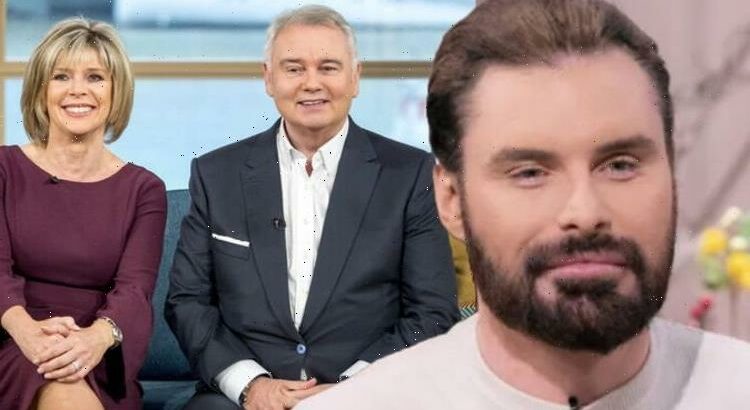 Rylan Clark, 33, used to work with Eamonn Holmes, 62, and Ruth Langsford, 62, on This Morning. The TV presenter has spoken out about the support the couple offered him after his relationship with Dan Neal broke down.

Rylan began his relationship with Dan in 2014, and the pair married the following year.

It was announced last year that the pair had split after six years of marriage and Rylan had to take a period of time off work.

Discussing his split, he said: “There was a point when I was really, really bad when I went back to my house that I’d moved out of.

“I hadn’t been there for so long because I didn’t feel comfortable.

“My mum and sister-in-law were acting really weird and I didn’t know why. Next thing, Eamonn and Ruth turned up and I just broke down.

“They were frightened. They were really shocked at the state I was in”, he told The Sun.

Rylan was absent from June until September from his regular roles on BBC Radio 2.

During his time away from the station, hosts including Oti Mabuse and Cat Deeley had stepped in to cover his regular slot.

He felt the need to address his absence and released a statement at the time.

He said: “Following reports about Dan and I spending time apart, I feel I have to speak out – as the way it is being reported is unfair.

“I have made a number of mistakes which I deeply regret and have inevitably led to the breakdown of our marriage.

“I have taken time away from work as I am not in a good place at the moment and am seeking help.

“I am trying to take each day at a time and would like to thank you to everyone for their support and for respecting our privacy at this time.”

He spoke to Lorraine Kelly on her ITV show upon his return about the turbulent period in his life.

Rylan said: “I’m normally on [TV] every five minutes, I apologise, you have to see my mug all the time.

“But no, I had four months off and it was needed actually.”

“It’s been ten years, now, I’ve been doing this job nearly, which is crazy. So maybe the time off is exactly what I needed but I’m good.”

Rylan rose to fame on X Factor in its ninth series, and went on to win Celebrity Big Brother.

He then presented Big Brother’s Bit on the Side, This Morning and The Xtra Factor.

His career is going from strength to strength as he is now the host of Supermarket Sweep, as well as the BBC’s You Are What You Wear.