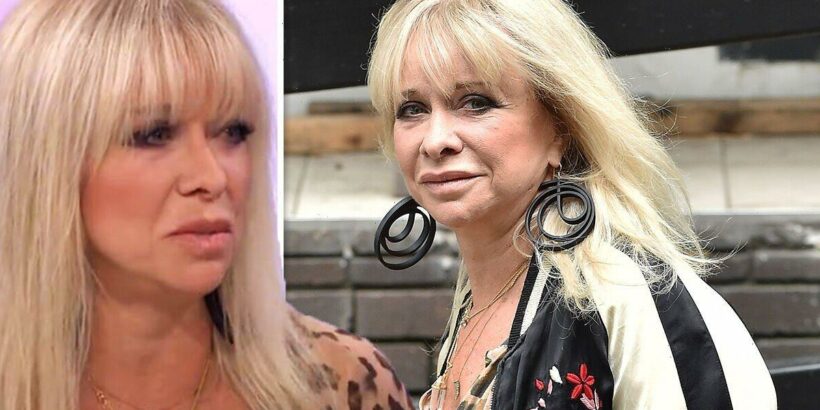 Jo Wood opens up about her split from ex-husband Ronnie

Jo Wood has opened up about her health woes after breaking her ankle at her ex-husband, Rolling Stones rocker Ronnie Wood’s home. Earlier this year, the star, 67, underwent an operation on her ankle, which she admits gave her “trouble all the time” before she had the surgery.

And now I have trouble with it all the time

Speaking to Express.co.uk earlier in the year, the model told how she’s undergoing a foot operation.

Jo explained: “I’m going to be with my foot up for six weeks.

“So I have to get really creative and do things while I recover,” she added.

The star went on to explain that she frequently suffers because of the injury.

Jo said: “Because I have two little bones on the top of my foot I’ve not got any cartilage because I had an injury on my foot years ago.

“The body just does something and it wore down the cartilage.

“And now I have trouble with it all the time. So I’ve taken the plunge and am now going through with my op.

“That’s not very exciting, but something that’s very necessary,” she quipped.

Earlier this year, the star told how she injured herself.

Jo said: “I’m in agony! It’s all due to me falling down a stone staircase holding my little nephew and breaking my ankle at Ronnie’s. And, no, I wasn’t drunk!”

“I want to get better so I can see the Stones in Hyde Park this summer.”

“I want to say ‘hello’ to Keith [Richards] and [his wife] Patti — and limping along on one leg in an orthopaedic boot is not a rock ‘n’ roll look!” she said to MailOnline.

Following her op, Jo shared a photo of her bandaged foot in its cast in the car on the way home.

She wrote alongside: “HOME! For six weeks…. Thanks again for all of your wonderful messages.”

Elsewhere in her chat with Express.co.uk, the businesswoman candidly opened up on the state of her love life following her split from Ronnie.

Jo didn’t rule out marrying for a third time but said that it’s not on her mind at the moment as she’s “happy” being single.

When asked if she would consider marrying for a third time, the mother-of-three told how it isn’t on the cards for her at the moment.

Jo said: “Who knows? I’m quite happy as I am actually.

“You know, you never know. You can never say never.