When Kendall Jenner opened her November 2020 Vogue Beauty Secrets video with a face full of green gunk, I was instantly intrigued. What was this world-famous beautiful person doing looking… well, still beautiful, but also like she was covered in baby food? I got my answer quickly when she explained she was showing viewers her skincare routine, and this avocado-based mask was the first step. After watching the full video and realizing I couldn’t afford any of the other products in her process (which include a $50 sheet mask and a $160 serum), I decided to try Kendall Jenner’s DIY avocado face mask to see if that alone would help me achieve her glow-y look… without spending tons of cash.

In her video, Jenner says she whipped up this mask in her kitchen with the following ingredients: avocado, oatmeal, something called "superfood honey," and organic lavender oil. It turns out, this isn’t the first time Jenner has done this mask. In April 2020, she posted an Instagram of herself with a similarly green, chunky concoction on her face. The fact that she’s done this mask at least twice led me to believe Jenner actually enjoys whatever effect the mask has on her skin, which was comforting as I geared up to try it out for myself.

Because I’m far from a skincare expert, the thought of DIY-ing anything on my face makes me nervous. So, I did some research to see what I was getting myself into. Celebrity facialist Gavin McLeod-Valentine (who has worked with the KarJenner clan before) actually weighed in on Jenner’s avocado mask from April in an interview with Popsugar, telling the outlet: "As a superfood, avocados are full of essential vitamins E, C, and K, which have great anti-aging properties, which also help to build elastin within the skin." He also noted that oatmeal, which has antioxidant and anti-inflammatory properties, can treat dry skin, remove dirt and oils, and help with redness.

As for the superfood honey Jenner touts in her Vogue video (which was gifted to her by her sister, Poosh queen Kourtney Kardashian), it’s called Beekeeper’s Naturals B. Powered Superfood Honey: a combination of royal jelly, bee pollen, propolis, and raw honey. According to the brand’s website, the product is a dietary supplement used for energy, as well as an ingredient that can be applied to the skin. Although McLeod-Valentine didn’t speak directly about this product in his interview, he did mention raw honey is good for skin with acne, and noted it is "full of antioxidants, has anti-aging properties, and historically has been used as a soothing agent to calm and moisturize sensitized skin."

So far, all of the ingredients Jenner used to make her mask sounded great… until I got to my research on lavender oil. In a reaction video to Jenner’s skincare routine, YouTuber and medical esthetician Cassandra Bankson balked at the idea of putting lavender oil in a face mask. "This is a horrible idea," she says in her video, noting that lavender oil is an allergen that can be extremely potent if it’s not properly diluted. "Any time you are mixing an essential oil into a product on your own, you are setting yourself up for disasters, for skin irritation, for contact dermatitis, and major epidermal mistakes." Yikes. 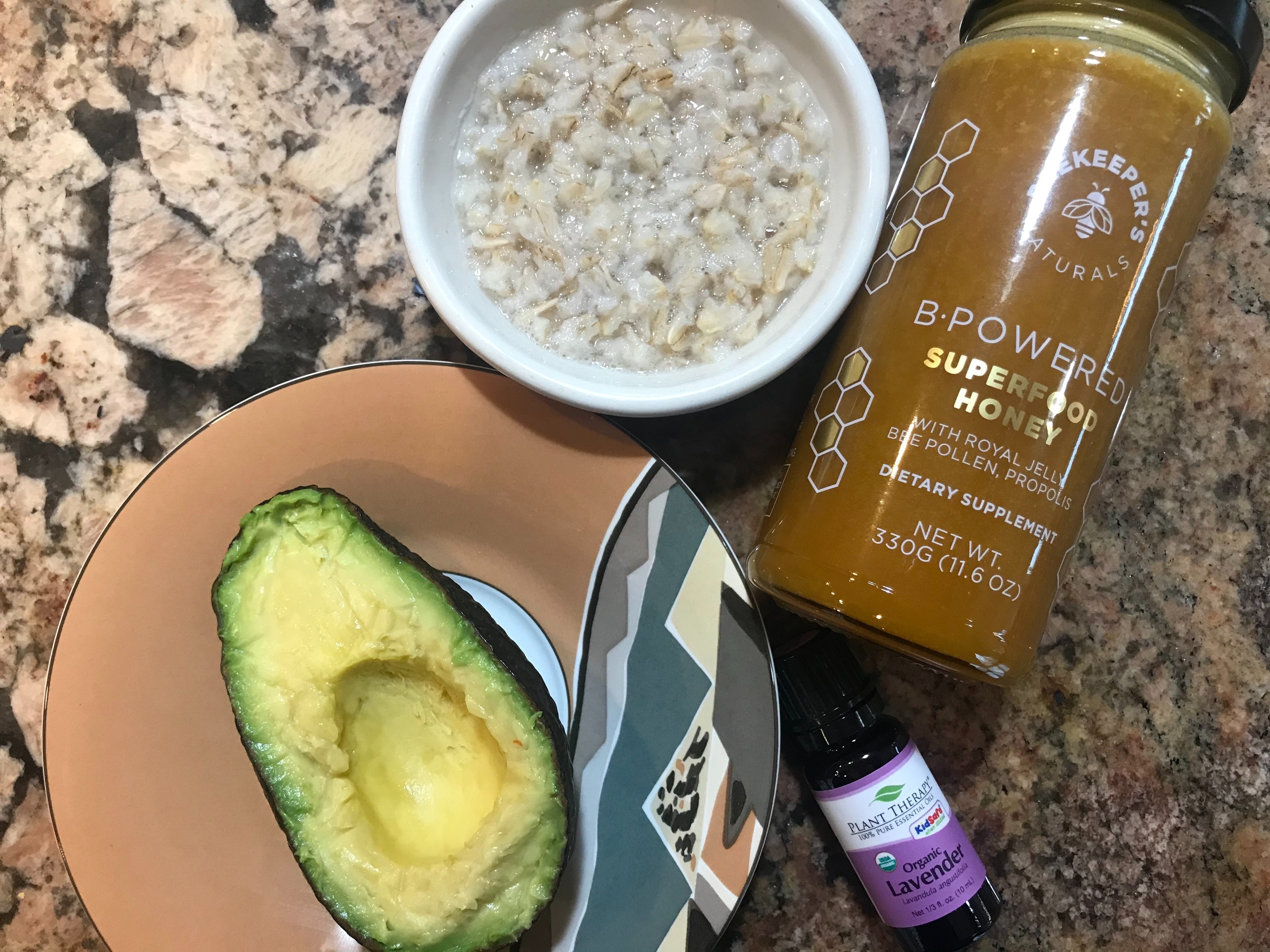 Bankson also pointed out that while avocado, oatmeal, and honey can be beneficial for the skin, they are most effective when broken down and formulated into professionally-manufactured skincare products — or simply eaten to absorb the benefits.

TBH, my research definitely made me feel a bit wary to go through with this experiment. But, at least I was armed with knowledge of both the potential risks and rewards. So, just as Jenner courageously walked through a protest to hand a police officer a Pepsi, I bravely went forward with my plan.

In the video, Jenner doesn’t specify the measurements of each ingredient she mixes into the mask, so I just tried to eyeball how much goopy stuff would be needed to cover the surface area of my face. First, I scooped half a chilled avocado into a bowl. Then, I microwaved 1/8 cup of oats mixed with 1/4 cup water to make the oatmeal, and stirred that into the avocado once it was done. After that came 1 tablespoon of the superfood honey, which has a much thicker consistency than regular squeeze-out-of-a-plastic-bear honey, so I had to mash it up to combine it with the other ingredients. Finally, I added two drops of organic lavender oil — which even smelled potent — and stirred vigorously. 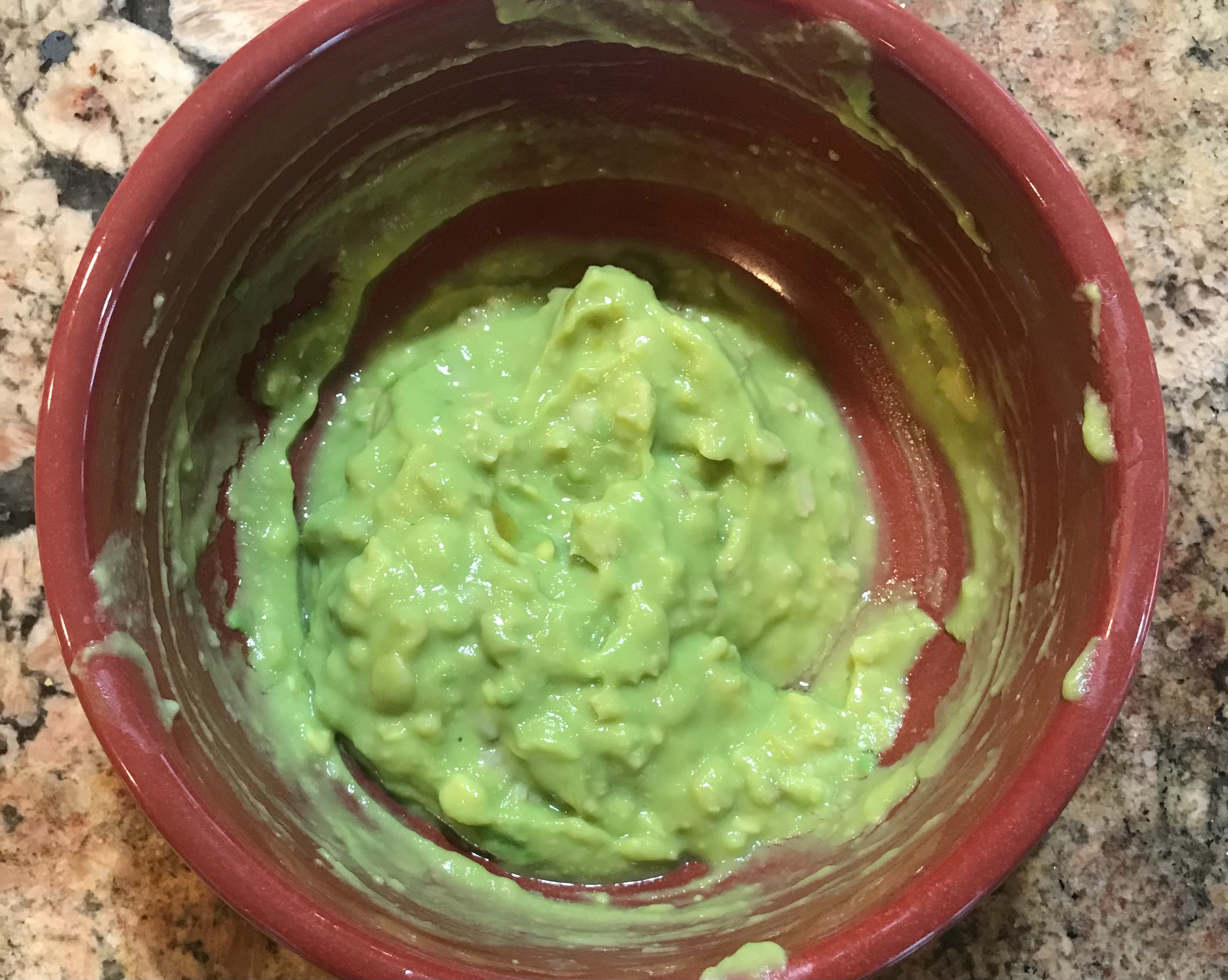 The visual result of this step was… unpleasant. The mixture was kind of watery, and yet I could also see clumps of oats and honey that hadn’t perfectly combined. Suffice it to say, I was less than eager for the next step.

I think I said “OK, here we go” three or four times before I actually dipped the spoon into the mixture and started slathering it on. After a few attempts of smearing the chilly mush around on my cheeks with the spoon, I gave up and started reaching into the bowl with my (clean!) hands to more effectively get it all over my face. I carefully avoided the sensitive area around my eyes, just like Jenner does in her video.

The application process was very messy, and I was thankful I pulled my hair back before getting started. However, I wish I’d had the foresight to apply the mask over my kitchen sick, which has a stopper over the drain to catch food particles, instead of my bathroom sink, which does not. As soon as my face was sufficiently green, I made sure to wipe up all the avocado, oat, and honey chunks that fell off in the process.

When all was said and done, I’d only used about a quarter of the mask mixture that I made, so on top of feeling icky about having food on my face, I felt bad about wasting food I could have eaten. 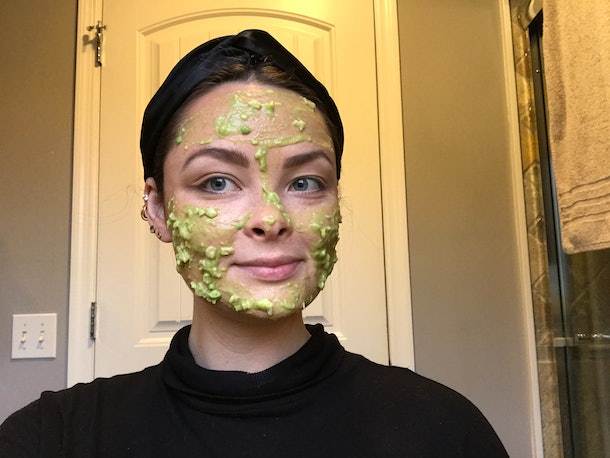 Because the mask was both too liquid and too solid, I was afraid to make any sudden movements out of fear that chunks of my mask would fall off and stain my clothes or make a mess on the floor. At one point, I had a clump of oats dangling from my chin that made me feel as far from Jenner-esque as possible.

Jenner didn’t mention in the video how long she keeps the mask on before washing it off, so I aimed to last 10 minutes, the first three of which I spent trying to get a decent-looking selfie that wouldn’t make me look like a swamp thing. By the end of my mini photoshoot, I noticed my face was getting kind of itchy — a sign of irritation. I held out, though, thinking it could be the exfoliating property of oatmeal at work. However, the longer I sat there, the more I worried I became over possibly ruining my face with the lavender oil. Even though I only put two drops in the whole mixture — and then only used about a quarter of that mixture — Bankson’s warnings were haunting me. So, holding the mixing bowl under by chin to catch any dipping bits, I beelined it to the kitchen to wipe the mask off after eight minutes of wearing it.

Standing over a sink that lends itself much better to handling food items, I was less cautious about making a mess as I removed the chunky bits off my face with a wet paper towel. Then I thoroughly rinsed my face with water until it felt totally clean. I avoided following up with any of my usual cleansers or moisturizers right away because I wanted to first check out the effects of just the mask on its own.

Thankfully, my face was still intact — maybe slightly pink, either from light irritation or just my enthusiastic scrubbing when taking the mask off. After a few minutes, the redness went away. My skin felt soft, and not sticky or tight like I’d worried it might be. 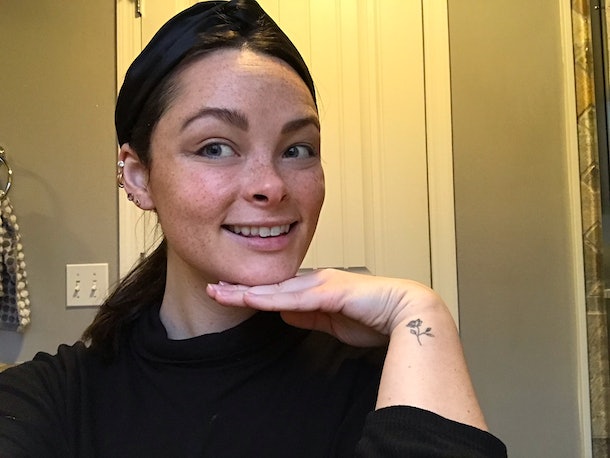 This mask was fun to make, kinda gross to wear, and seemingly harmless to my skin. I wouldn’t jump at the chance of trying it again, but if I were to give it another shot, I’d want to make the consistency a a bit more homogenous. Maybe I could use the more finely-ground steel-cut oats, or even grind up my own oats in a food processor, if I’m feeling fancy.

Better yet, though, I’m just going to leave my skincare products to the experts. Kendall didn’t say in her video how often she whips this mask up, but it seems like a lot of effort (and stress over damaging my skin) to do it on the reg. I’d much rather wear a less messy, dermatologist-approved mask while eating avocado toast and oatmeal with honey. Heck, maybe I’ll even spring for a diffuser to use up the rest of my lavender oil. I think Kendall Jenner would approve of that.

In Elite Daily’s I Tried series, we put celebrities’ favorite products, recipes, and routines to the test to show you what living like your fave star is really like. Read more here.