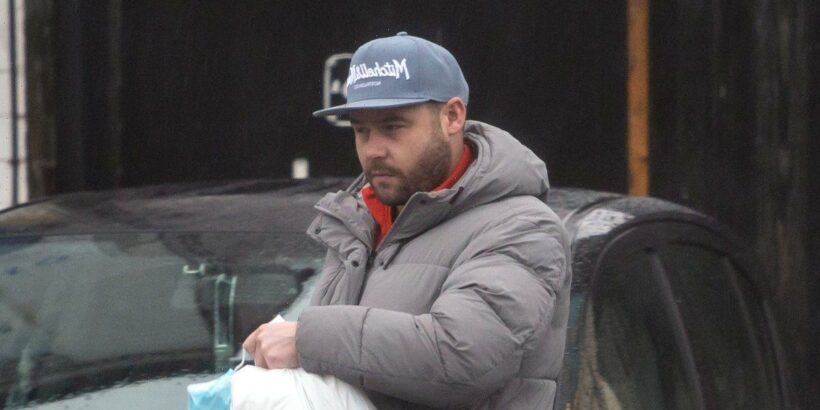 The former Emmerdale star left the I'm A Celeb castle a few weeks ago after being crowned winner of the 2021 series and has since been enjoying some time at home over the festive period with his family.

Danny, 30, opted for a casual look as he walked through a high street in Manchester, wearing grey jogging bottoms, a grey puffer jacket and a hat as he clutched a plastic bag and face mask.

The star – who is a proud new dad to baby son Albert – recently shared with fans the news that him and his fiancée Steph had tested positive for Covid and were self-isolating and hosted a Q&A with his followers.

In a video Danny told his fans: "Hi guys so after 23 days of not being able to see or speak to Steph and Albert which was the hardest time of my life we now have the perfect opportunity to catch up with one another as we begin isolation because Steph has, unfortunately bless her, caught Covid and she is not feeling the best today so she has just gone down for a sleep while Albert is asleep."

He continued: "But yeah don't worry about us we are all good and yeah if you don't laugh about these things you are going to cry aren't you?"

In a Q&A with fans, Danny also revealed he lost over a stone in the Castle and joked he “needs a new wardrobe”.

One fan asked the popular actor: “How much weight did you lose?”

Danny revealed his three weeks in the castle saw his weight drop more than a stone, he said: “1.1 stone, need a new wardrobe” followed by a laughing face emoji.

The soap star took his time in Gwrych Castle seriously and admitted that on the celebs return to the castle after Storm Arwen interrupted the show, that he stuck to camp conditions after the contestants were evacuated.

Talking about his time away from the ITV show, Danny insisted he stuck to camp conditions and even slept on the floor.

Danny insisted that he stuck to the camp's strict conditions. The TV star said: "I stuck to it [Castle life]. I didn’t even sleep in the bed."

During his Q&A one fan asked him if this was really true. They asked: “Did you really stick with the rice and beans when you had to evacuate because of the storm?”

The soap actor replied: “Yes I didn’t want to reset my body so I stuck to rice and beans and it worked."

It comes after Danny shared a look inside his postponed welcome home party at The Buxton Inn in Hyde, Tameside after he and fiancée Steph finished their isolation.

Danny beamed as he posed alongside Steph in the pub in front of a TV screen displaying a snap of the actor in ITV's Gwrych Castle, Wales, which read: "Congratulations from all at The Buxton Inn. To our local lad Danny Miller 'King of the Castle' in 2021 I'm A Celebrity…Get Me Out of Here!

The soap star shared the snap to his 689,000 Instagram followers, captioned: "So @stephjones1710 and the family organised a welcome home party we finally got round to tonight at our good friends pub @thebuxtoninngx and I couldn’t be happier!

"Thanks once again to everyone who made this happen!! All the love from me and mine."

Stay up to date with all the latest on your favourite stars by signing up to OK!'s daily celebrity newsletter.