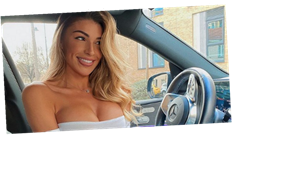 Zara McDermott treated fans to a detailed insight into her job pre reality TV stardom during a Q&A session on Tuesday evening.

The 24-year-old, who found fame after entering the Love Island villa in 2018, used to work as an advisor to the government in a role that she claims was “so varied.”

Zara explained that she joined in 2015 on a placement as part of a “fast track apprenticeship scheme.”

The reality star explained that she didn’t do a degree and opted to obtain a foundation degree in business while working as part of the Fast Stream graduate programme.

She did this after her A Levels, for which she studied: “Psychology, RE, Media, English Literature.”

Explaining her first role to fans she wrote the following: “The Department had climate change targets to meet and there would be various strategies in order to do so! For example, coming up with schemes where people can claim funding for using renewable energy, i.e. using solar panels. It sounds kinda boring but I loved it!!!”

She continued: “Essentially I worked in policy for a bit but I loved working in briefings and correspondence because it meant that is the Prime Minister or any Minister were to be asked a question on our specific team area, my job would be to work with experts and draft a brief with their expertise.”

Admitting that she “loved” the “super fast-paced” environment, Zara explained that she’d be “running around the office speaking to as many policy officials as [she] could and pulling the briefings together.”

She also revealed that she’d have “even more fun” when she got to “watch the ministers debate in the House of Commons.”

After a short stint as a project manager, which she confessed she “hated” – Zara explained that she preferred “working on detail and not overseeing projects” – she moved into her “dream department” which was the Department of Education.

During her time there, she assisted in “bettering the education system from the inside out” which she said gave her “such a good feeling.”

“I worked in Further Education for a little while, I did a few projects around apprenticeships too,” she added.

The Made In Chelsea favourite – who is currently dating co-star Sam Thompson – also took the opportunity to open up about her desire to become an educator. “I have always wanted to be a teacher,” she wrote.

“I wanted to move into early years education but I got scouted for Love Island about eight months in [referring to her time in the Department of Education] so I ended up taking a career break to take that opportunity, with the view of going back at some point.”

And it’s not something that Zara has ruled out. She admitted: “I wonder if I ever will go back or where my life will lead me!!”