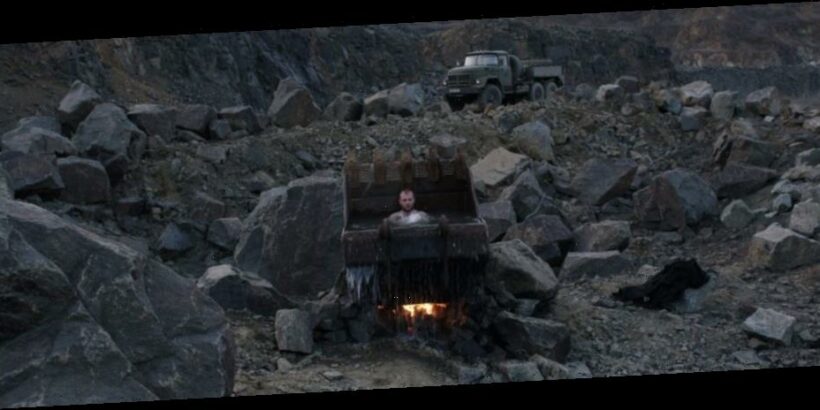 Set in 2025, Ukraine’s post-apocalyptic International Feature Film Oscar entry Atlantis imagines life — and death — in the country one year after the ongoing war with Russia has ended. Sergiy (Andriy Rymaruk) and his friend Ivan (Vasyl Antoniak) both suffer from PTSD, and lead joyless lives shooting at targets and working in a steel factory. When the factory is closed down by its British owner, Sergiy ends up driving a water truck around the barren landscape.

Everyone he encounters is dealing with death, whether they are searching for landmines or long-dead corpses. Katya (Liudmyla Bileka) is a former archaeologist who exhumes bodies and tries to identify them. She sees her new role as “digging up your own history.” A bond forms between her and Sergiy, giving a glimmer of hope.

In his fifth feature, which won the Venice Horizons top prize in 2019 and was released in the U.S. by Grasshopper Film last week, writer-director Valentyn Vasyanovych finds beauty and poetry amid death and devastation — and his third role, as cinematographer, is key. Keeping the camera mostly static, he invites the eyes to wander around the frame along with his subjects, guessing their motivations as they silently go about their jobs. Many of these scenes are macabre yet mesmerizing, such as a man dictating his findings to a typist as he examines a corpse. Small details — such as “nothing in pockets” — tell a big story.

Others bring a moment of relief. At one point, Sergiy gathers wood and makes a fire under an abandoned digger. Filling it with water from his truck hose, he strips off for a hot tub in the wilderness. Later, a tender sex scene takes place surrounded by corpses. The imagery is stark, uncomfortable, just shy of over-the-top in its symbolism.

Light and fire are key features: the opening and closing scenes use infrared, while the molten metal of the steelworks offers a hellish backdrop. From cars to abandoned houses, much of what Sergiy comes across is either on fire or burned. The fire inside him remains chiefly unspoken: this internalized man doesn’t even exclaim to himself in the most challenging situations. His silence during threat is an effective way to imply his tragic backstory: we can deduce that he has seen far, far worse.

While politically charged, the script only occasionally refers to Russia when showing the devastation of the war. This is a frighteningly real post-apocalyptic vision, where a land is left almost uninhabitable, but a few people remain, honoring the dead and finding what life and love they can.

Vasyanovych also edited and produced the film as well as serving as DP. Visually, it’s easy to compare him to Stanley Kubrick and even Wes Anderson — symmetry plays a part in some of his most striking static scenes. Tonally, there are shades of Werner Herzog. But Vasyanovych’s tone is distinct; not to mention timely. The crisis he depicts can be as dull as it is dramatic, making Atlantis an eerily topical watch.