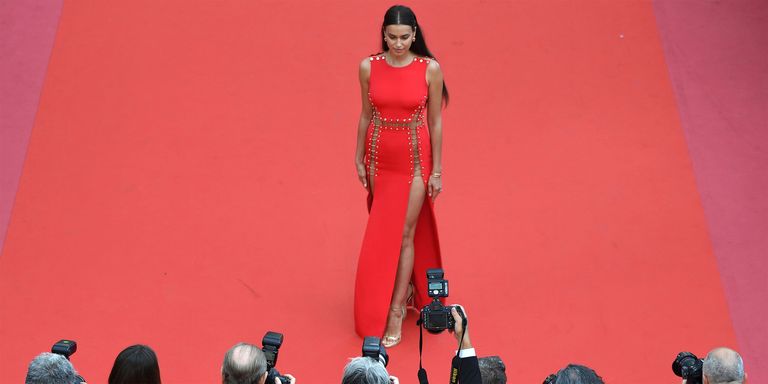 Cannes Film Festival has been off to a tame start compared to past years, but things are heating up on the red carpet on day three. Irina Shayk might be to blame as she was captured strutting down la croisette for the premiere of French director Christophe Honoré’s Sorry Angel, in this sultry red gown.

The thigh-grazing slits we’re used to seeing look like child’s play compared to this Atelier Versace gown Shayk was sporting. How high is too high one might ask? Clearly Shayk doesn’t believe in such limits, or the need for undergarments for that matter— as her custom Versace dress featured not one, but two slits that went all the way up to her midriff. The panels of fabric were held together by silver chains and Medusa studs, a signature of Versace.

As if we weren’t already mesmerized by her supermodel body, Shayk also flashed a bit of side boob for the cameras.

This is the Russian supermodel’s second appearance at the festival this week. Following the Met Gala on Monday Night, where she made a rare public appearance with her rumored fiance, and father of her 1-year-old daughter, Bradley Cooper— she flew to the South of France just in time for the opening ceremony and premiere of Asghar Farhadi’s Everybody Knows Tuesday evening where she wore a more demure dress by Twinset.

This evening in Cannes, Shayk led the red carpet parade with other top models like Josephine Skriver Stella Maxwell and Petra Nemcova, along with bold-faced Hollywood names like Lupita Nyong’o and Amber Heard.

The bar has officially been raised.