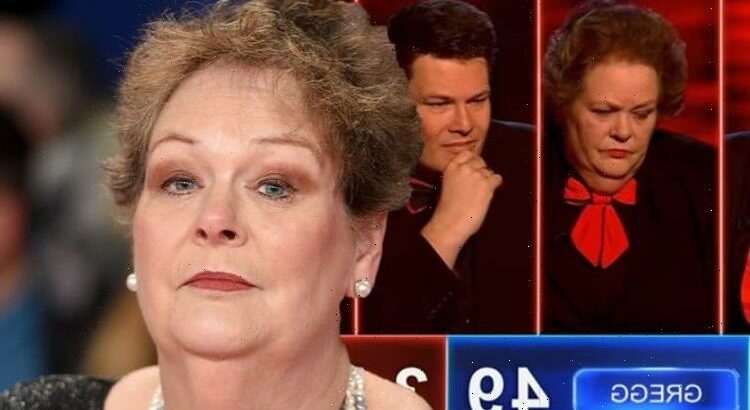 Anne Hegerty, 63, spoke about her speed during Beat the Chasers, and how she does not feel up to scratch compared to her teammates. The quizzer has been on The Chase since 2010.

There are a lot of times I think, is my buzzer working?

Express.co.uk asked Anne which show she preferred to film out of Beat the Chasers and its predecessor.

She said: “I guess the downside of it [Beat The Chasers] is I’m not quick.

“I mean I am quick compared to almost anyone else, but you know there are five other people on that team that are faster on the buzzer than me.

“And so, they are liable to beat me to the buzzer.”

She even questioned if her button to buzz in was working properly when the programme first kicked off.

The presenter continued: “There are a lot of times I think, is my buzzer working?

“Then I realised yes it was working, I was there, yes I was trying to get to it but everyone was beating me to it.

“But it is a great show and we get these really tight finishes which is tremendous fun.”

Anne explained this is the reason why viewers will sometimes will not hear as much from her in Beat the Chasers.

The Chase, however, Anne has been a firm favourite on since she joined over a decade ago.

The star does not get nervous for shows, and believes this is one of her strengths.

She detailed: “I do a lot of quizzes just to keep in shape and I don’t really get nervous.

“I have been quizzing for a long time, I know what I’m doing.

“But at the same time there is always this thought in the back of the mind, today is the day they are going to find you out.

“But I think every quizzer feels that way.”

Darragh is the newest member of the team, having joined in 2020.

He was on The Chase in 2017, with his miraculous knowledge helping him gain a position on the panel.

You can watch The Chase every weekday at 5pm or watch Beat the Chasers on Saturday at 8.30pm.

Anne will be starring as Mrs Blundermore in a Jack and the Beanstalk panto this year.

The panto is running from December 10 to January 2 at Hayes Beck Theatre.