Rachel Brosnahan won big at the Emmy Awards on Monday, Sept. 17. The 27-year-old actress took home the Lead Actress in a Comedy Series Emmy, making her the first woman other than Julia Louis-Dreyfus to win the award since 2012. If you don’t have an Amazon Prime account, Brosnahan might be a new name for you, since her leading role on Amazon’s The Marvelous Mrs. Maisel is what really put her on the map. (She played Rachel Posner on House of Cards for several seasons previously.) So who is Rachel Brosnahan dating? What other shows has she been seen on before becoming Mrs. Maisel? What is there to know about the actress?

Brosnahan appears to be dating The Magicians actor Jason Ralph. They attended the Emmy Awards hand-in-hand on Sept. 17 and were both wearing rings on their left ring fingers (you know, that finger), but there has been no official confirmation that they’re married. Elite Daily reached out to Brosnahan and Ralph’s teams for comment on the reported relationship, but did not hear back by the time of publication.

Could Brosnahan and Ralph have gotten secretly married though?! I love me a good secret marriage. (I also love me a good proposal during an Emmy Awards acceptance speech. I just didn’t know I loved it until I saw it happen. Regardless, big fan.)

Brosnahan and Ralph hit the Emmy Awards red carpet together on Monday, Sept. 17. 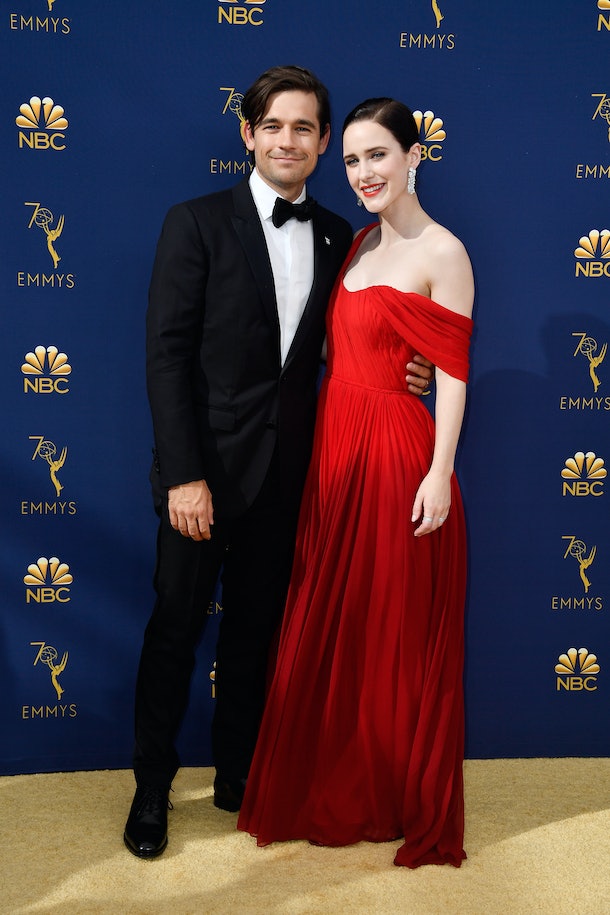 Brosnahan was previously nominated in the Guest Actress in a Drama Series award for her performance on House of Cards and won a Golden Globe for Mrs. Maisel last year, so she’s no stranger to award shows.

She gushed about her Maisel show creators, Amy and Dan Sherman-Palladino, in her acceptance speech during the Emmy Awards.

“I’ll be thanking you for the rest of my life for trusting me with your Midge,” she said. Brosnahan continued, “[Mrs. Maisel is] about a woman who’s finding her voice anew. It’s something that’s happening all over the country right now. One of the most important ways that we can find and use our voices is to vote … Vote, show up, and bring a friend to the polls." When the camera cut to Brosnahan after her name was announced, you can see Ralph beaming with pride.

The Marvelous Mrs. Maisel ended up taking home four of the six Emmys it was nominated for, including a Supporting Actress – Comedy Series win for Alex Borstein and the coveted Outstanding Comedy Series award.

Brosnahan posted on Instagram following the show gushing over the excitement she had over her win as well as to thank the team who got her ready for the night. Ralph, on the other hand, posted a photo of the Emmy Awards red (well, gold) carpet with a Pokémon on it.

The more you know!

Brosnahan and Ralph have reportedly been dating since they met on the set of Manhattan in 2015. They’ve made a lot of public appearances together, so at the very least, we know they’re dating, but it’s not clear if they’re married or not. Those rings are confusing me! Are they for fashion or for love?! Maybe we’ll find out at next year’s Emmy Awards.