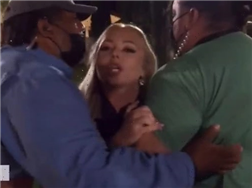 It’s about to be on between Jade Cline and Ashley Jones.

And in violent fashion.

As first reported back in mid-September, the eight-part Teen Mom crossover event planned for early 2022 — which will feature cast members from all Teen Mom franchises, including Farrah Abraham — will turrn very ugly very quickly.

Which is to say:

A fight will break out between multiple stars.

Now, courtesy of a trailer released this week by MTV, we can identify the two young women at the center of this fracas.

In footage also shared to Instagram by Briana DeJesus, we see and hear Cline scream at Jones:

MTV security guards then step in as things appear to escalate, keeping Ashley and Jade apart from each other.

Two bodyguards in particular hold Jade back as she just keeps screaming and yelling at her co-star, telling Jones she plans to “get my f***ing hands on you!”

Another guard, meanwhile, can be spotted getting in front of Ashley as she refuses to back down.

“You don’t want that smoke!” she tells Jade.

DeJesus, for her part, wrote as a caption to the teaser:

Ever wondered what happens when all the Moms get together? (+ some surprise guests) Don’t miss when #TeenMomFamilyReunion premieres on Tuesday, January 11 at 8/7c on @MTV!

We learned about two months ago that Abraham would return for this special series, over four years after she got fired for starring in X-rated videos online.

She even appeared a few weeks ago on the Teen Mom OG reunion stage — via a previously recorded segment, that is.

“I had such a good time catching up with you on the set of Family Reunion,” said Farrah to Amber Portwood and Maci Bookout, who were seated in the studio on a sofa.

“Now, it’s true, some drama went down… [but] have a great reunion. No storming off!” she concluded at the time.

The polarizing star previously spoke to TMZ about her big return, too.

“I always wish them the best, I think there’s still a lot of progress to be made,” she told this celebrity gossip site of her ex-colleagues.

Did any drama go down, she was then asked?

“I think I could walk through the door and dramas going to happen, sadly,” replied Farrah, seemingly unaware this may be because she’s the one bringing the drama.

“I just warn others to keep their hands to themselves. Do not sneak attack a woman and do not gang up on a woman because I don’t handle that too well,” Farrah added at the time.

Wait, so things really did turn physical, the TMZ reported followed up?

“Yeah and I think people should not physically attack you, especially after Covid and our real-world of news. Don’t touch people,” said Farrah.