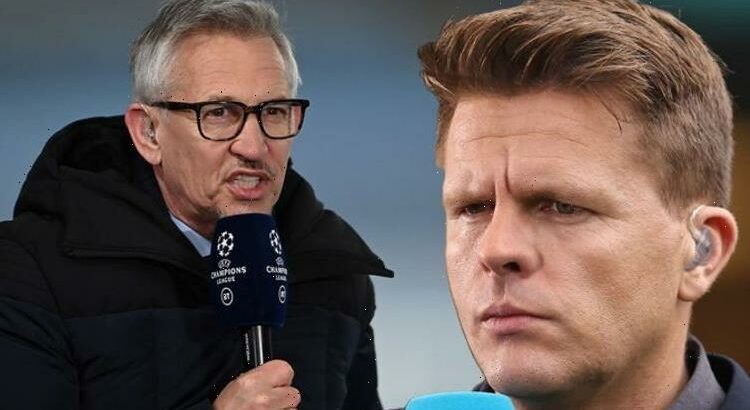 Jake Humphrey, 43, has revealed he would be open to presenting on Match of the Day, calling the show a “legendary programme”. Jake is the main presenter of BT Sport’s football coverage and presented BBC’s Sports coverage of Formula One Grand Prix from 2009 to 2012.

Gary has presented Match of the Day since the late 1990s, giving him the longest tenure of any presenter on the show.

Express.co.uk asked Jake if he would be open to presenting the show, taking over from the former footballer.

“I loved my time at the BBC, and it was a period of my career where I was doing amazing stuff and I would definitely never say never.

He continued: “But I am really happy doing BT Sport and I feel really lucky to be on live Champions League football, and I love covering live sport.

“That’s the real thrill for me, you never know where it’s going, so my preference will always be live sport, however, you struggle to say no to a legendary show like Match of the Day.”

It comes after Match of the Day host Gary admitted he “stumbled through” his early TV career, describing the beginning of his career as “appalling”.

Talking on The Media Show podcast, Gary said: “I did some stuff for 5 Live in the early days of radio which was fairly appalling at the start.

“I managed to stumble my way through it and I learned from really good people alongside me who were incredibly helpful in the early days.”

Jake, however, revealed he had to work hard to get his career in live broadcasting due to not going through the usual routes to get the BBC job.

He said: “I went for a meeting with the BBC to say that I really wanted to be a sports presenter and I was told at that time that they don’t employ people like me because I wasn’t a trained journalist and I hadn’t competed at a high level as a sportsperson.

“I was desperately trying to say you need to think outside the box here, I am a broadcaster and I love TV and I love sport.

“So, I was basically told it wasn’t going to happen. I think when you’re on kids TV you get this idea that maybe you’re a bit further up the TV ladder than you are.

“There were a lot of people leaving the children’s BBC at the time expecting to waltz into top-level jobs and I said ‘Just look, I will do anything it takes’.”

Before Jake got his big break, he would finish work and drive to second and third division football to show he was dedicated to the role.

He continued: “I wanted to prove that I didn’t have an ego and expected the top job.

“I did that for quite a while and then it’s hard to know at the time that these are big moments but looking back I was then asked to go and host the Super Bowl in America.”

Jake was eventually offered the job to present Formula One and has since gone from success to success, recently releasing a book.

High Performance: Lessons from the Best on Becoming Your Best by Jake Humphrey and Damian Hughes is published by Random House Business on 9 December.