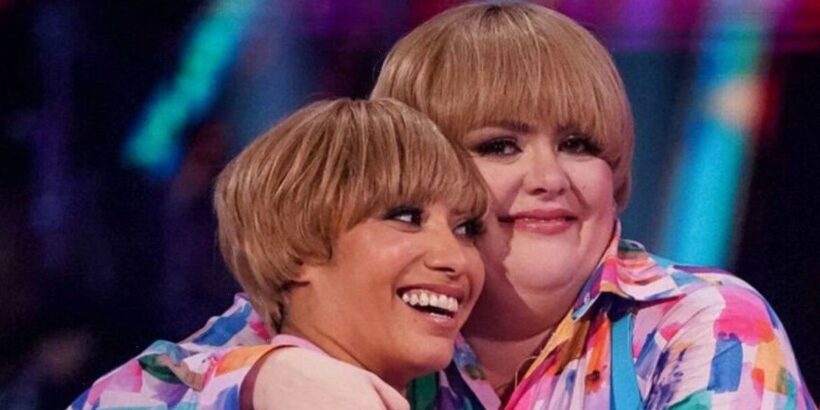 Jayde Adams, 37, was sadly voted out of Strictly Come Dancing this week after landing in the dance-off against Molly Rainford. The comedian has taken to Twitter to break her silence on her shock exit, while also hitting back at criticism from trolls surrounding her place on the BBC show.

Don’t worry about me babes.

Sharing a picture of this week’s dance with Karen Hauer, Jayde wrote in view of her 47,400 followers: “Don’t worry about me babes.

“#Strictly was a cherry on an already fab cake. Thank you Karen &

Many social media users rushed to the comments to share their sadness over the comedian’s departure from the show due to Tony Adams still having a place despite only scoring 19 points.

HostileGaming13 said: “I would have complained. How can Tony be 7 points worse than everyone and still get saved.

Deathbysuzy added: “Your dancing has moved me and motivated me more than one tweet could ever convey.

“Everybody is a ballroom body and we all deserve our flash dance moment; thanks for sharing yours with us all.” (sic)

Loobylou65 commented: “You were stitched by this week’s theme, as was Molly.

“You deserved to go so much further but we all know that British people can’t be trusted with a vote.”

Although Jayde was met with plenty of love, throughout her time on Strictly the comedian was left to justify her place on the show from trolls.

Alegirl5 wrote of Jayde’s performance last night: “Why are the judges always so gushing about Jayde? That was dismal. #Strictly.”

Alegirl5 then hit back: “I’m sure they do, but the marks should reflect how good the dance was and not how lovely you are.”

Jayde then quoted the tweet to show her fans her body positivity in the wake of her exit.

She wrote: “In this life y’all gotta learn to be confident enough to have your own opinions and not need the approval of others to maintain it.” (sic)

Jayde has since spoken to the BBC on Woman’s Hour about how she has handled the negative criticism since being on Strictly.

“I could do one of two things, I could ignore it, or I could tackle it. I found it funny, I could show people who follow me some resilience.

“Someone wrote, ‘this is Jayde Adam’s rocking up to Strictly’, with a picture of the Michelin Man, and I laughed!

“I don’t want people to say stuff like that but these people want to have a reaction. The most useful thing to do to not get at them, it’s to show resilience because it’s never going to stop.”