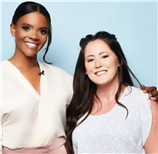 Jenelle Evans appears to be aiming for some kind of makeover at the moment.

Not of the physicial variety.

Of the reputational variety.

How else to explain the former Teen Mom star making an appearance this week on a web series hosted by the very conversative and very polarizing political pundit Candace Owens?

What could Owens and Evans possibly have to talk about?

How natural it is for southern people to kill family pets, apparently, based on what Jenelle told Candace about her husband murdering her dog a couple years ago.

While many observers remain flummoxed over why Jenelle would appear on this program, along with why Owens would want her to appear, at least one individual out there has rushed to Jenelle’s defense.

This almost never happens, of course.

“Y’all bet not start harassing Candace for allowing @j_evans1219 on her show neither!” screamed this Instagram user.

“Y’all need to get a damn life when y’all try to stop someone else’s blessings you really blocking your own.”

This remark, as you might expect, generated quite a few responses, with a bunch of critics accusing the former Teen Mom 2 star of not being educated and, therefore, not being qualified to be a guest on Owens’ program.

Jenelle took issue with these accusations.

“No education? Well I have my high school Diploma and a college degree… but yeah let’s not talk about facts,” the mother of three fired back.

Here’s the thing, though:

Jenelle doesn’t have a college degree!

Yes, she has graduated from a medical assistant program, but that’s not exactly the same.

Nor would this be any kind of big deal; college isn’t for everyone and it’s very possible to live a happy and successful life without having gone to a four-year university.

But Jenelle is the one who brought this topic up and she isn’t exactly popular person to begin with, giving haters easy ammunition with which they could go on the offensive.

“It’s totally ok to not go to college. I have a higher degree than my husband who makes more money than me in the trades. Ffs don’t lie about it,” explained one user, while another added:

“It’s just so infuriating that she thinks we are all this stupid. We saw yah on TV doing school, and never being able to work in the field, you pinecone.”

Pinecone. What an amazing insult.

Randomly enough, Farrah Abraham recently got roasted for alleging she had graduated from Harvard University.

Do these D-Listers not realize that such claims are easy to investigate?

That anyone with an Internet connection can pretty much look them up and determine whether or not they attended a certain school?

These are easy assertions to disprove.

During her discussion with Owens, Evans was asked if she’d ever return to MTV (not that executives are anxious to invite her back, as far as we know).

“I’m open to opportunities,” she replied.

“Probably not the same show, but I’m open to talking to any networks, like I said, and we would have to have long discussions.”

Those discussions would likely begin and end with a producer telling Jenelle there ain’t no way she’ll be hired as long as she’s married to a violent abuser and bigot.