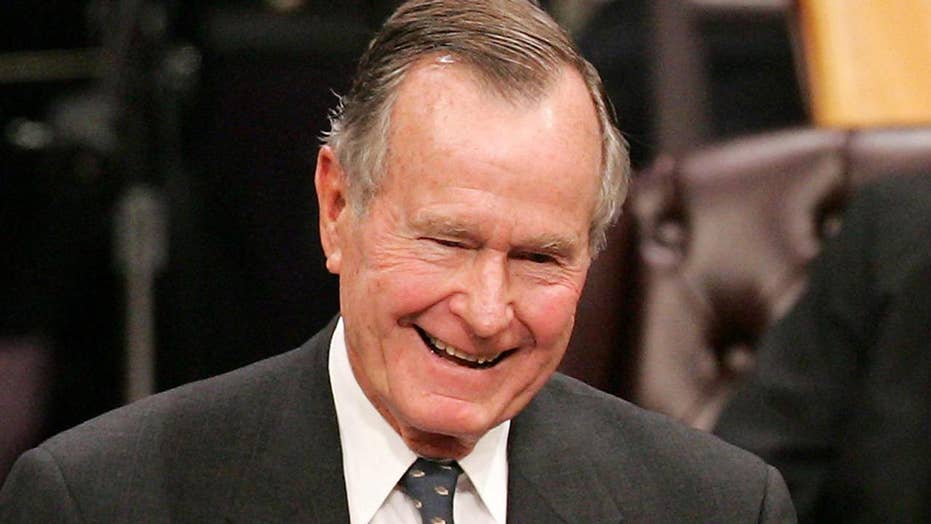 The life and times of George H.W. Bush

George Herbert Walker Bush took office in 1989 as the 41st U.S. president and served one term in the White House. The father of former President George W. Bush, he was a Naval aviator in World War II, a congressman, ambassador to the United Nations, envoy to China, CIA director and vice president for two terms under Ronald Reagan.

On Saturday morning, the '"Today" show host took to Instagram to honor her grandfather's passing.

"Waking up missing this giant of a man who gave me everything," Jenna wrote in a heartbreaking post featuring a selfie with her sister, Barbara, and the late Bush and another throwback photo from when she was a little girl. "He taught me and my family about service, family, decency, the power of gentle words and a beautiful heart. I will miss him desperately but so happy he and my Grandmother are back together."

In addition to her personal photos, the daughter of George W. Bush shared a cartoon by Marshall Ramsey of her grandfather and grandmother Barbara Bush, who passed away at the age of 92 in April, reuniting in heaven. The image also features the couple's first daughter, Pauline Robinson "Robin" Bush, who died of leukemia at age 3 in 1953.

"I had the opportunity to talk with my grandpa about the afterlife," Jenna wrote in the picture's caption. "This is what he said: He answered without any hesitation. 'Yes, I think about it. I used to be afraid. I used to be scared of dying. I used to worry about death. But now in some ways I look forward to it.' And I started crying."

She continued, "I managed to choke out, 'Well, why? What do you look forward to?'" Jenna wrote. "And he said, 'Well, when I die, I'm going to be reunited with these people that I've lost.' And I asked who he hoped to see. He replied, 'I hope I see Robin, and I hope I see my mom. I haven't yet figured it out if it will be Robin as the three year old that she was, this kind of chubby, vivacious child or if she'll come as a middle-aged woman, an older woman.' And then he said, 'I hope she's the three-year-old.'"

The former president, who spent a lifetime in public service and as the nation's leader scored a decisive victory over Saddam Hussein but battled a faltering economy, died Friday at age 94.

His son George W. Bush issued the following statement upon his father's death:

"Jeb, Neil, Marvin, Doro, and I are saddened to announce that after 94 remarkable years, our dear Dad has died. George H.W. Bush was a man of the highest character and the best dad a son or daughter could ask for. The entire Bush family is deeply grateful for 41's life and love, for the compassion of those who have cared and prayed for Dad, and for the condolences of our friends and fellow citizens."