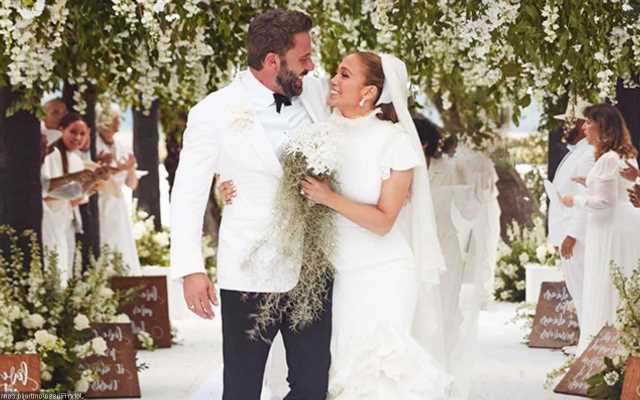 In a new entry on her On The JLo newsletter, the ‘Marry Me’ star shares new photos from her Georgia wedding last month that was clouded by bad weather and stomach bug.

AceShowbiz –Jennifer Lopez and Ben Affleck may have had their dream wedding at their second nuptials in Georgia last month, but it wasn’t without a hitch. In a new entry on her On The JLo newsletter, the new bride opened up about how they faced “unexpected setbacks” prior to the August 20 nuptials, no thanks to bad weather and stomach bug.

“It had rained at sunset every day that week,” the 53-year-old singer/actress wrote via the newsletter published on Thursday, September 1. “Everyone was worried about the heat, the aptly named ‘love bugs,’ the details, would the guests all arrive on time, etc. – not to mention the thunder and lightning that arrived almost on cue each day at the exact time the ceremony was supposed to start that Saturday.”

The “On the Floor” hitmaker added, “Oh, and all of us caught a stomach bug and were recuperating ’til late in the week, that, and along with a few other unexpected setbacks, had all the makings of a doozie of a wedding weekend.”

But the stars aligned on the big day. “The truth is, I never had one doubt,” J.Lo confessed. “All week I felt the calm and easy certainty that we were in God’s hands…At six forty-five, Saturday, August twentieth, the sun broke free and cast its rays like little diamonds dancing across the river behind the makeshift altar in our backyard.”

She went on describing the perfect wedding, “The sky was clear blue, and distant clouds of pure white held fast in the sky. As the sun set behind the live oaks draped in Spanish moss, a warm breeze swept over the lawn where our closest family and friends sat and, at long-last, I started my walk down the stairs that would become the aisle that would lead me toward the rest of my life. Ahhhhh…it was actually happening…”

On the newsletter, J.Lo also shared new photos from the lavish celebration, noting, “That night really was heaven….” She echoed her husband’s sentiment as she revealed what he told her at their wedding, “This is heaven. Right Here. We’re in it now.”

The “Hustlers” actress explained that the message came from Ben’s work in film. “That is one of my favorite lines that Ben wrote from a movie he directed called ‘Live By Night‘,” she wrote. “And I thought…how perfect.”