The drama between Ronnie Ortiz-Magro and girlfriend Jen Harley is heating up. After a slew of harsh messages written by both the Jersey Shore star and Harley on Sunday, April 29, Ortiz-Magro posted on his Instagram story an apology. “I want to apologize for earlier to my fans, and especially @tater_to_kitty I acted on my gut and not rationally,” he wrote on Monday, April 30. “I should’ve never acted in such a manor. My deepest apologies.” 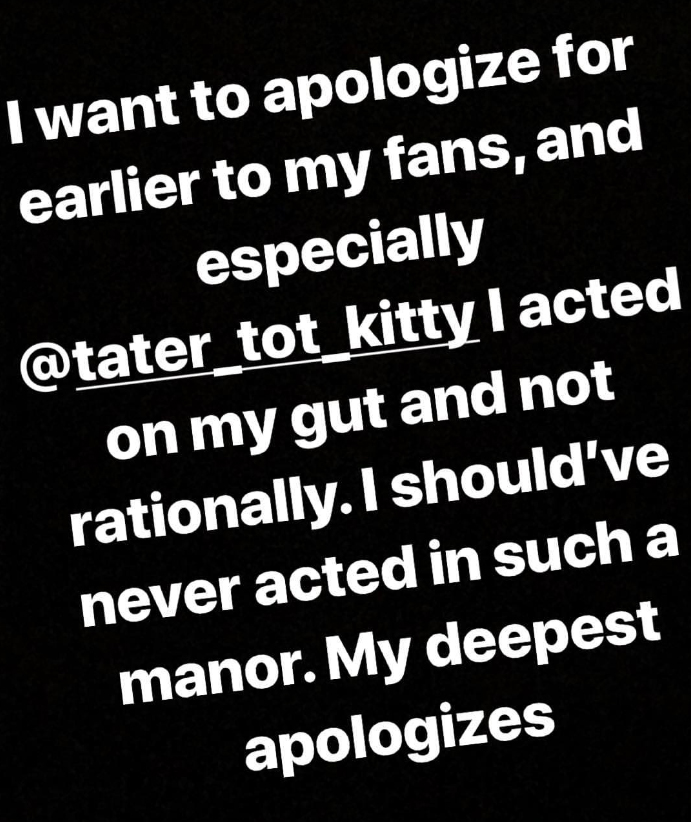 However, the 32-year-old later deleted the message and posted a screenshot of a text conversation between him and one of his friends from months ago. The friend wrote: “After she went to the pool the other day and she wouldn’t answer your calls we were f—king on the taco float in the back yard, look at her pics on her phone. She took a bunch, that’s why she didn’t answer. She was showing me your text, asking what’s wrong cuz she called you 5 times earlier. How would I know all that?” 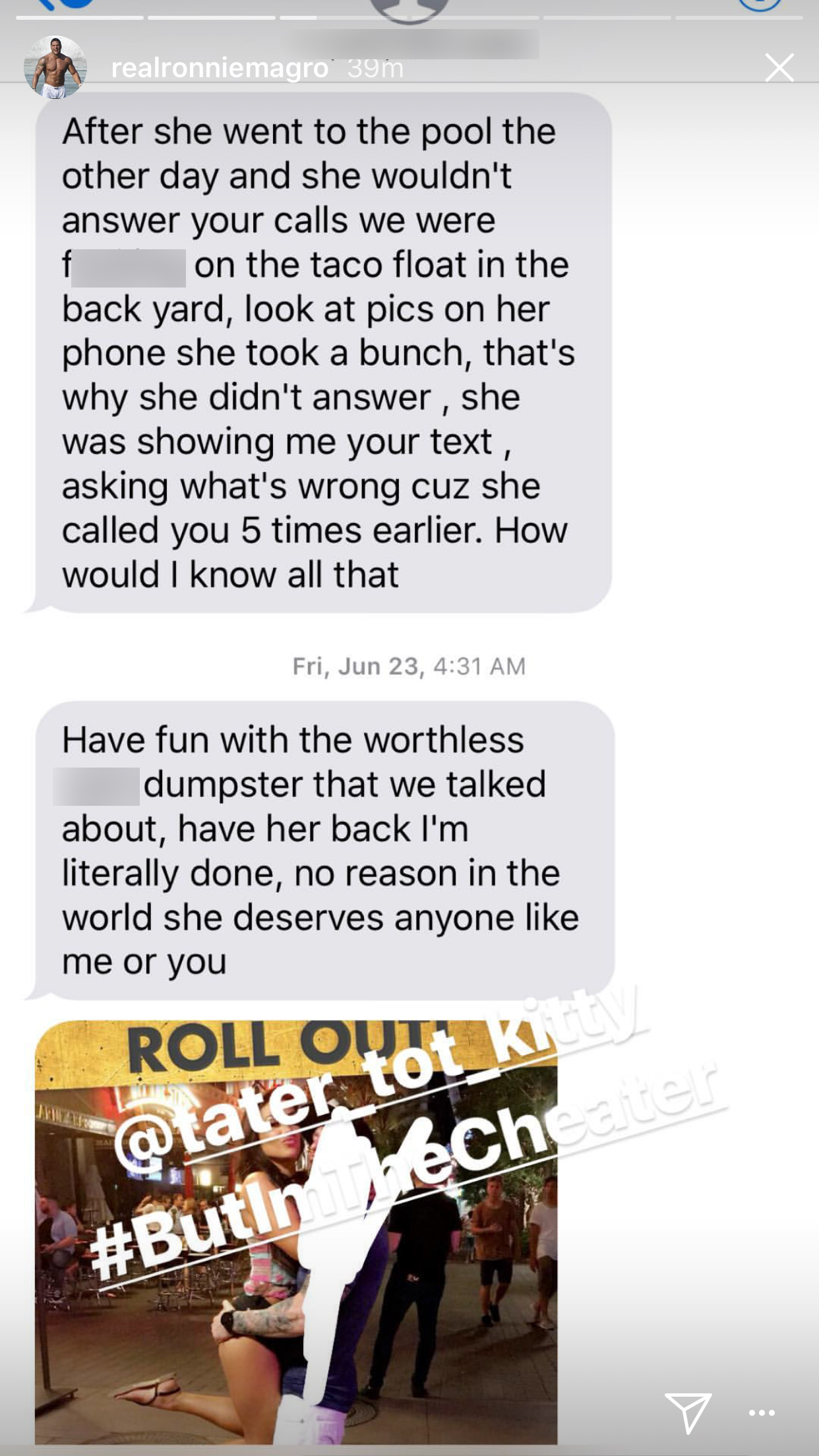 The next message sent in the conversation was from June 23 from the same friend. “Have fun with the worthless c— dumpster that we talked about, have her back. I’m literally done, no reason in the world she deserves anyone like me or you,” the text read, which was followed by a photo of Harley with a man, whose face is blurred out.

Over the photo, Ortiz-Magro tagged Harley and wrote “#ButI’mTheCheater.” The screengrab is now deleted. 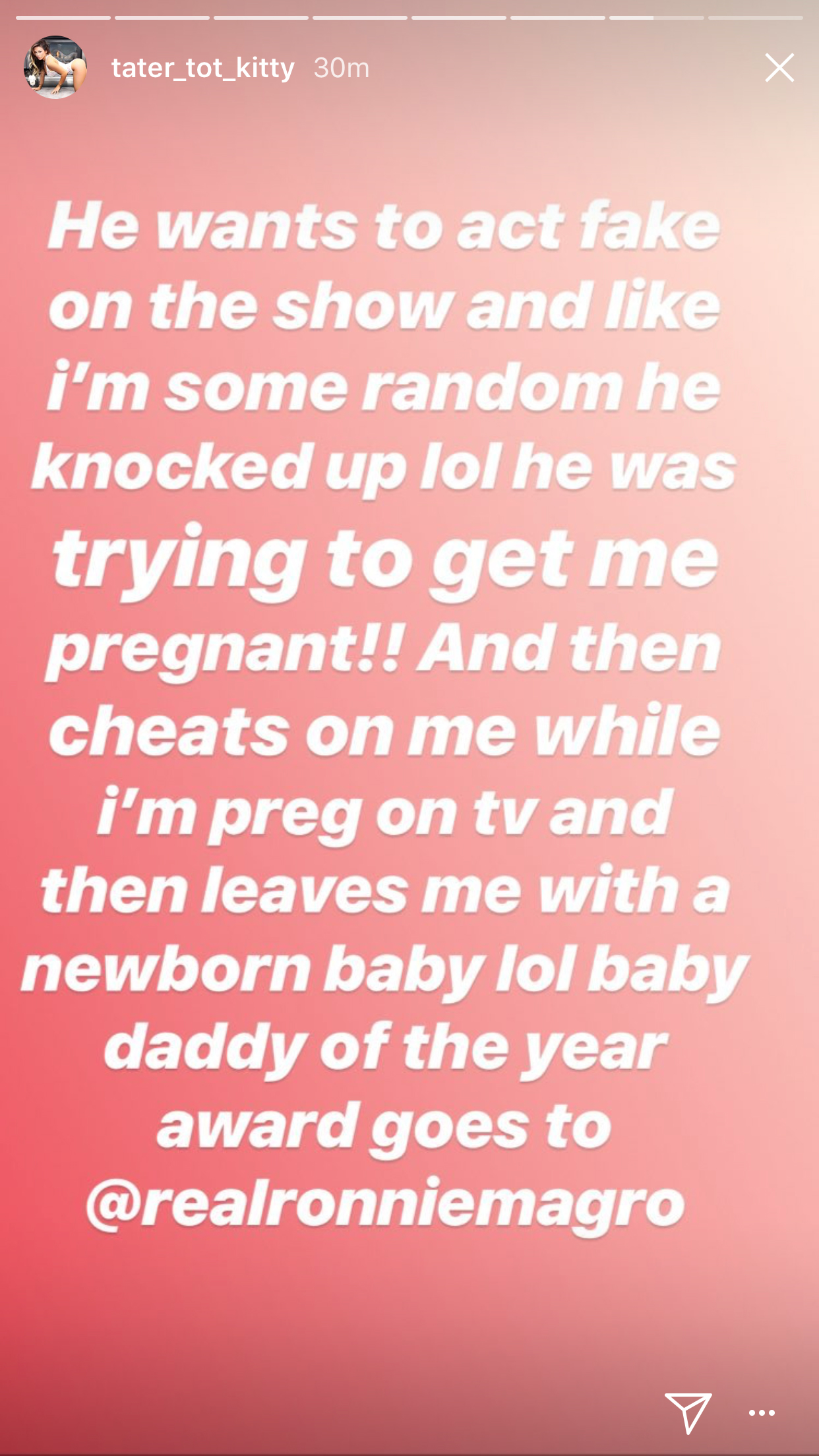 Harley seemingly responded, writing on her story, “He wants to act fake on the show and like I’m some random he knocked up lol he was trying to get me pregnant,” she claimed. “And then cheats on me while I’m preg on TV and then leaves me with a newborn baby lol baby daddy of the year award goes to @realronniemagro.”

As Us Weekly exclusively revealed, Ortiz-Magro and Harley welcomed their first child together, Ariana Sky, on April 3. Harley was seven months pregnant while he filmed Jersey Shore: Family Vacation. During last week’s episode, he told his roommates he wasn’t sure he wanted to be with Harley and seemingly cheated on her after bringing home another girl.

The fight began on Sunday when the reality star posted “Can’t turn a natural born HOE into a HOUSEWIFE,” then asking his followers, ““If your significant other keeps sex videos of their ex, shouldn’t they show enough respect to delete them, esp after being in a new relationship for over a year?” She seemingly responded, posting on her Instagram, “Can’t turn a coke head into a father! Yeahhh buddy.”

For more on the cheating scandal and for the latest TV news and interviews subscribe to our new podcast ‘Watch With Us’ below!