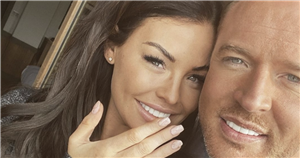 Jess Wright has revealed she wants her upcoming wedding to fiancé William Lee-Kemp to happen sooner rather than later as she plans to have children.

Opening up about the uncertainty of her upcoming nuptials because of the coronavirus pandemic, Jess, 35, said on her podcast Girls No Filter: “It’s just sh**. I always say because of my age, that’s the only problem because of having children.

"If I had years on me, if I was two or three years younger, we’d have of course moved it [the wedding] to next year or the year after. But we’re not in that position unfortunately and that’s why it’s been so stressful.”

Jess, who recently admitted that “times couldn’t get worse” for her family after cousin Elliott’s restaurant burnt down, went on to say that being a Covid bride has been a “slog”.

“Our engaged year was completely pretty much ruined,” she confessed. “But like I keep saying, we’re hoping that a sh** engagement year makes for a really good marriage because that’s like our silver lining.”

She added: “The worst thing for us is all our guests want to know because they also want to plan their year. It’s just crap.” Jess is set to wed William, 37, in September after originally planning to get married in Mallorca in June.

She told New magazine last month: “I know as much as anyone does. It’s just a case of waiting and seeing what happens.”

She added: “I’m pretty much sorted. Now it’s just a cause of seeing whether it can actually go ahead.”

Jess previously admitted she fears she’s left it too late to have a big family.

“I appreciate when you have children it’s a massive deal and your life changes forever, but I’m definitely getting to the age where I’m ready. I think I’m going to have to do it soon, aren’t I?”

On her plans to have babies, she continued: “I’ve always said four, because my mum’s got four and I think it’s important to have lots of kids around you for when you’re older.

"But because I’ve left it quite late I think I’ll be lucky to have two.”