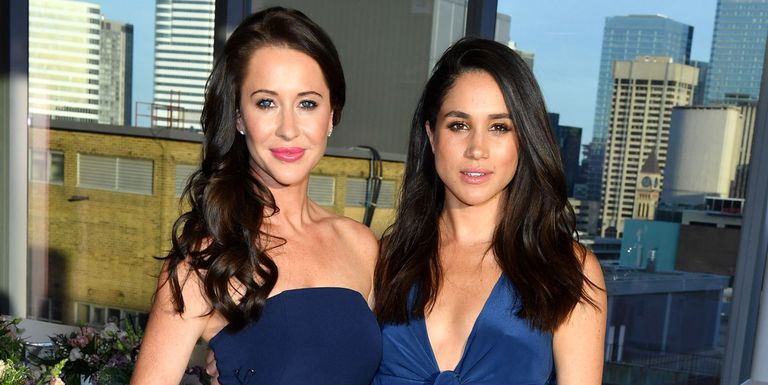 May 19 will be one of the greatest days in history as Meghan Markle walks down the aisle to marry Prince Harry at St. George’s Chapel, Windsor Castle. One person who will likely be in the crowd is her longtime BFF Jessica Mulroney, a stylist and bridal consultant who lives in Toronto (home of the CN Tower, the Toronto Blue Jays, and Suits). According to Vanity Fair, Jessica has been Meghan’s “secret wedding planner,” working behind the scenes as two official event organizers tend to other things related to the big day. Says one VF source, “She’s the one helping Meghan to make all the key decisions. They are on the phone daily discussing every element of the wedding, from the dress to the flowers to the canapés and the photography.” Below, what you need to know about Jessica ahead of that blessed day in May:

1. She’s a well-connected stylist based in Toronto who also specializes in weddings. Jessica, who has a degree in industrial relations from McGill University, does PR and consulting for the Canadian branch of Kleinfeld (yes, the same Kleinfeld made popular by Say Yes to the Dress) under Hudson’s Bay. She also provides bridal styling services (check out her professional Insta account @JessicaMulroneyWeddings), writes for Wedding Vacations magazine, and makes regular appearances on the Canadian daytime talk show Cityline as a “Lifestyle Expert.” In 2016, Jessica helped Meghan choose a wedding gown (via Kleinfeld at Hudson’s Bay)… for an episode of Suits.

2. She’s related to the founders of Browns Shoes, a Montreal-based retail empire that was founded in 1940. Jessica, who grew up in the Westmount neighborhood of Montreal, is the great niece of founder Morton Brownstein. Jessica’s second cousin, Michael, is now Browns Shoes’ CEO.

4. She’s married to Ben Mulroney, son of former Canadian Prime Minister Brian Mulroney. The couple, who grew up in the same town and have known each other since they were teenagers, began dating in 2007 and were married in October 2008 in a celebration that lasted for three days. Jessica and Ben, a TV host whose posts have included the Canadian entertainment news program eTalk and Canadian Idol, have three young children together: twins Brian and John, 7, and daughter Isabel, 4.

Out of 100 tries, this was the best one. Merry Christmas to all of you! #bedheads

5. Jessica’s house became a haven for Meghan and Harry when news broke of their relationship. It was October 2016, and Harry was already in Toronto when the world found out about his new girlfriend. As Katie Nicholl wrote in her book Harry: Life, Loss, and Love, the couple took refuge at Jessica and Ben’s house in Toronto during the chaos. “Harry found them immediately kind and welcoming people, and he loved hearing stories about his mother,” according to a friend of Ben’s, who added, “Jessica is one of the nicest, sweetest people you will ever meet, and Ben is really easy to get along with.” (via Vanity Fair excerpt.)

6. One of Jessica’s biggest clients is Sophie Grégoire Trudeau, wife of current Prime Minister Justin Trudeau. Just don’t call the relationship official, though. In a 2017 Toronto Life profile of the Mulroneys, the Prime Minister’s Office said in a statement, “Mrs. Trudeau does not employ a stylist. Still, Jessica’s work did not go unnoticed. Just before Justin Trudeau’s swearing-in ceremony in 2015, Jessica sent over some options. “She wore a coat by Canadian designer Sentaler and people went crazy for it. We had created this media frenzy, like you see with anything Kate wears,” Jessica told The Telegraph in 2016, referring to the Kate Middleton effect. “Then we realized we had a responsibility to create more moments like that to give homegrown designers an international platform.”

7. Yes, this means Jessica is really good friends with the Trudeaus. Here they are having a casual double dinner date weeks before the Canadian federal election in 2015. In an interview with The Globe and Mail, Jessica insists that the friendship between the Mulroneys and Trudeaus is politics-free. “Ben has been friends with Justin for a long time and I met Sophie through Ben when they were working together on etalk. The relationship has been there for a long time in terms of a friendship.”

Politics aside… Dinner with these two ?#buca #barbuca

9. She’s the co-founder of a charity that benefits women living in shelters. In 2011, Jessica and her three sisters-in-law launched The Shoebox Project, which distributes items including socks, sunscreen, shampoo, skincare products, chocolate, and gift cards to women who are homeless or at-risk of homelessness in the U.S. and Canada. The organization has distributed over 91,000 boxes in the last 7 years. In May 2017, Meghan was photographed wearing a bracelet benefitting the organization while visiting Harry at a polo match in Ascot.

This woman is busy. She juggles more in a day than most do in a week. And yet she still finds time to travel to Rwanda with @worldvision and creates global awareness for the water crisis. She is a boss. And I adore her ❤️ #worldvision #watercolorproject @meghanmarkle

10. In 2016, Jessica and Meghan took a girls’ trip to the Amalfi Coast and gave plenty of Instagram updates. While Meghan’s account has since been taken down, they’ll always have these memories on Jessica’s account, along with the hashtag, #MJxItaly.

When you work hard, you feel grateful for the time you have to reflect. I cannot wait for another year.. #positivevibes #MJxItaly

Update 5/14, 11 a.m.: As per Harry’s communications secretary Jason Knauf, Meghan has opted to not have a maid-of-honor on her wedding day. (Jessica was a rumored frontrunner for months.) In a statement, Knauf said, “She has a very close knit group of friends and did not want to choose one over the other.”