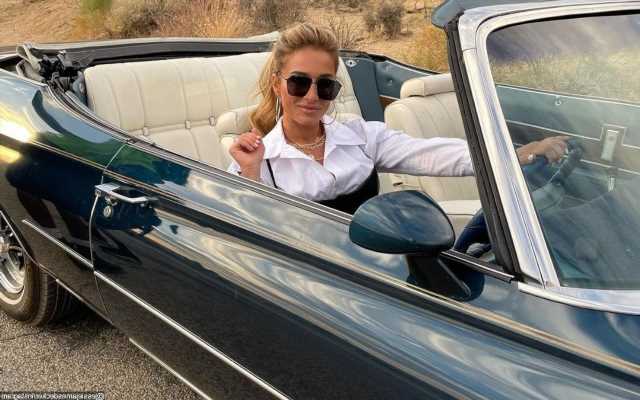 Just two days after clapping back at online trolls criticizing her weight, the ‘Southern Girl City Lights’ songstress unveils a sexy bikini picture of herself on social media.

AceShowbiz –Jessie James Decker continued to fire back at trolls criticizing her weight. Just a few days after shutting down her “disgusting” body shamers, the “Southern Girl City Lights” singer took to social media to show off her toned physique.

Making use of Instagram on Thursday, July 15, the 33-year-old shared a picture of herself rocking a sexy bikini and a bucket hat. Alongside the snap, which saw her holding what appears to be a Pina Colada, she simply wrote, “#Cheers.”

The post has since been flooded with complimentary comments from her fans. One user raved, “You look fabulous !!! If that’s what overweight looks like , I want to look just like you !!!!!!!” Another gushed, “Your body is LITERALLY GOALSSSSS.” A third added, “Your body is amazing… dont you EVERRRRR let anyones words define who you are. i never wanna see you crying again! you look SO SO GOOD GURL. GO OFF SIS !!!!!!!!!!”

The picture came just two days after Jessie shot back at online trolls for their rude comments about her weight. “So I’ve always been pretty confident in myself, and I’m not perfect,” she began her clip shared on Instagram Story. “I’ve always fluctuated in my weight up and down, but I have recently been sent a Reddit page that rips me apart on a daily basis.”

The “Flip My Hair” songstress, who broke down in tears, went on to note, “They’re talking about how, apparently, fat I’ve gotten, and how boxy and how terrible my body looks. And they’re accusing me of editing my body and all these things.” She added, “It’s pretty awful, and I cannot believe this is still happening in the world – that people are doing this.”

Jessie admitted that she has “gained weight, 100 per cent.” She further explained, “I used to obsess over it. I tried to stay a certain weight, and most recently, over the past year, I decided to just let myself live. I work out, and I eat what I want, and I 100 per cent am 10 pounds heavier than I used to be. Truthfully, I used to weigh like 115, and I’m not anymore.”

“When you are writing blogs and stories and bullying me about how much weight I’ve gained and how fat my thighs are, I do take that offensively. Because what is the messaging you are sharing?” she asked. “It is so disgusting to me the things I just found. … How can you wake up and live with yourself? I’m shaking because I cannot believe what I’m reading, and I need to stop.”

“I hope my daughter doesn’t grow up in a world where people do this to her because it’s wrong,” the wife of retired American footballer Eric Decker concluded her message. “I think we all need to do better.”