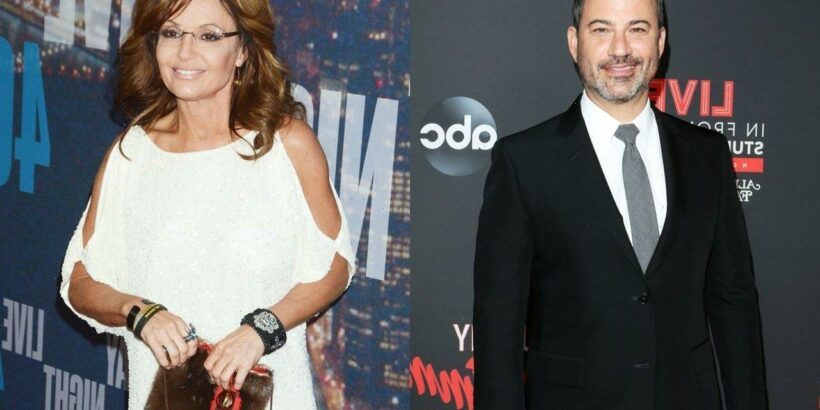 In a new episode of his ‘Jimmy Kimmel Live!’ show, the late-night show host drags the former governor of Alaska for reportedly dining out at multiple restaurants despite her COVID-19 diagnosis.

AceShowbiz –Jimmy Kimmel is coming for Sarah Palin over her reckless behavior amid the ongoing COVID-19 pandemic. In a new episode of his “Jimmy Kimmel Live!” show, the late-night show host dragged the former governor of Alaska for reportedly dining out at multiple restaurants despite her COVID-19 diagnosis.

“Sarah Palin-you remember her?-she has COVID for a second time now,” said Jimmy of the former “The Masked Singer” contestant on Thursday evening, January 27. “The unmasked singer is in New York City appearing in court. She has a defamation suit against The New York Times. Twelve years ago, she couldn’t name a newspaper-now she’s suing one.”

The host added, “So, the trial was supposed to start this week, but it had to be pushed when Sarah Palin, who is famously unvaccinated, tested positive again on Monday.” He continued, “In New York, you’re supposed to isolate for five days after a positive test-but that’s now how Alaska’s top hockey mom does it. She plays by her own rules.”

“The other night, she caught some flak for eating indoors at a restaurant, despite the fact that you’re supposed to show proof of vaccination to get in and she doesn’t have that,” Jimmy divulged. “But now, after testing positive, she went back to the same restaurant–with COVID and a guy who’s coughing. There’s Typhoid Mary having some linguini or something.”

He then shared a video of the Republican dining in an outdoor hut with her family on Wednesday night, just two days after testing positive for COVID. The night before, she was spotted dining al fresco at Campagnola, another Upper East Side Italian restaurant.

Joking, Jimmy said, “What’s she supposed to do? Sit in her hotel room and order from any of the 20,000 restaurants in New York City?”

Luca Guaitolini, a manager for the restaurant Elio confirmed Sarah’s two-time visits in a statement to CNN. “Tonight Sarah Palin returned to the restaurant to apologize for the fracas around her previous visit. In accordance with the vaccine mandate and to protect our staff, we seated her outdoors … We are a restaurant open to the public, and we treat civilians the same,” the manager said.

New York City Hall requires people to remain in isolation for five days after testing positive for COVID. “Our goal has always been to incentivize isolation for those testing positive for Covid and providing them multiple resources,” a New York City Hall spokesperson said. “That being said we hope that anybody who has Covid is isolating for their own safety and the safety of all new Yorkers and find it highly irresponsible that Sarah Palin refuses to do so.”

On Monday, a federal judge presiding over her defamation case revealed that they had delayed the trial because Sarah tested positive for the virus. “She is, of course, unvaccinated,” said U.S. District Judge Jed Rakoff Monday, according to Reuters.