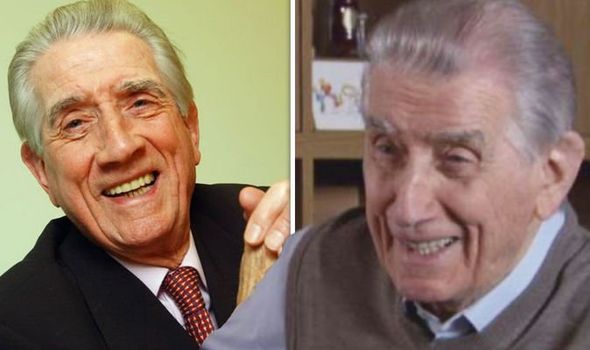 Veteran theatre star and River City actor Johnny Beattie has died peacefully after a short time at St Margaret’s Hospice. Johnny, who has played Shieldinch’s loveable pensioner Malcolm Henderson since the BBC soap was launched in 2002, left the programme in 2015 after a bout of ill health.

His career spanned over six decades and the actor established himself as one of Scotland’s legendary comics alongside Rikki Fulton, Jack Milroy and Stanley Baxter and also earned him an MBE.

Tributes have been pouring in for the actor, as many people offered their condolences.

Scottish actress Leah McRae penned: “My heart is sad to hear of the passing of the LEGENDARY Johnny Beattie. Getting to work with him on screen will forever be a career highlight of mine. I watched him in AWE. He was an exeptional talent but above all, a complete gentleman. Sending love to all of his family.”

Another person tweeted: “A very sad day for Scottish comedy , theatre and TV as the legend Johnny beattie has sadly passed away rip Johnny.”

While another fan remarked: “Sad to hear that the legendary #JohnnyBeattie has left us at the age of 93. An absolute gent of the first order with a razor sharp wit that was always kind. My thoughts and condolences go to his family.”

Johnny first got into the entertainment industry after joining an amateur dramatic show in 1951.

He later returned to comedy as a stand-up comic, panto dame and TV quiz show host on STV’s Now You See It in the 1980s as well as starring opposite Liam Neeson in the 1990 flick The Big Man.