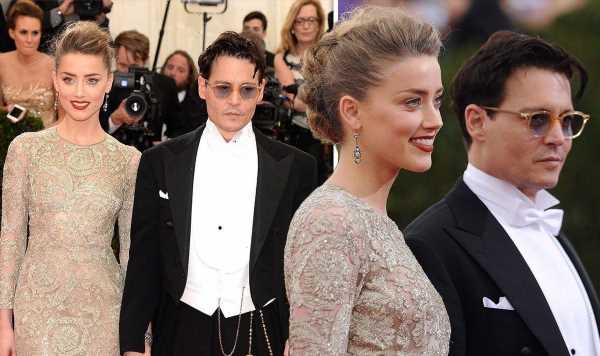 Johnny Depp, 58, and Amber Heard, 36, looked like an ordinary albeit very glamorous couple as they posed on the red carpet at the 2014 Met Gala. But yesterday in court, Amber testified Johnny hit her so hard afterwards he broke her nose – something he denies.

The theme of the Met Gala that year was Charles James: Beyond Fashion.

Johnny and Amber looked radiant as they posed for photographs together, the year before they got married.

Her red lipstick and nail varnish provided pops of colour to the look.

The actors held hands as they stood side by side, Amber smiling while Johnny looked a little more serious.

Yesterday, Amber claimed to her lawyer during direct examination that Johnny beat her up that very night.

She told the court that he became jealous, believing she was flirting with a woman at the bash, and claimed he shoved and grabbed her, before throwing a bottle at her.

“I think that was the first time I was like, ‘Is this a broken nose?’” Amber told her lawyer.

“At the time I was unsure what that feeling was, but I suspected I had a broken nose, and other than that, I was relatively unscathed.

“But I remember my nose being swollen, discoloured, and I took a picture of my face.”

The court was then shown photos of Amber’s face, with visible bruises and two black eyes.

“I remember he threw a bottle at me, missed me, hit the chandelier,” she added to the court.

Amber continued: “We were struggling, he’s bigger than me.

“He hit me, I remember my nose being swollen, red. I made a remark to my friend of how bad,” (sic) she told the court.

The Aquaman star first took to the stand on Wednesday where she told the court about the first time her ex-husband allegedly hit her.

She testified: “I will never forget it. It changed my life.

“He slapped me across the face and I laughed because I didn’t know what else to do.

“I thought this must be a joke. Then he slapped me again.”

Johnny has maintained he has “never hit a woman”. The trial continues.