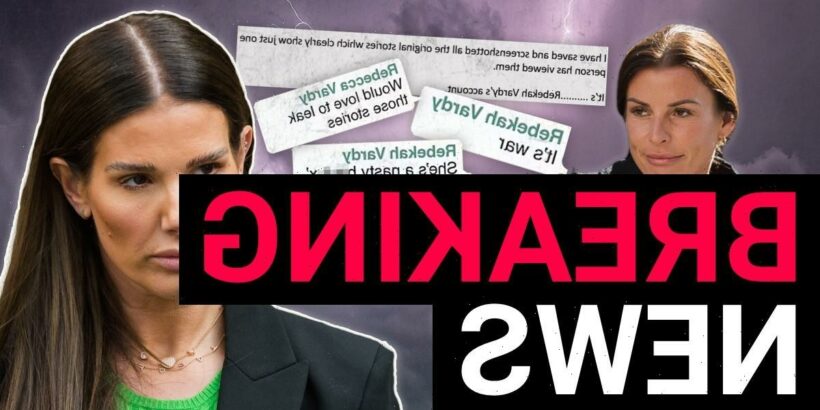 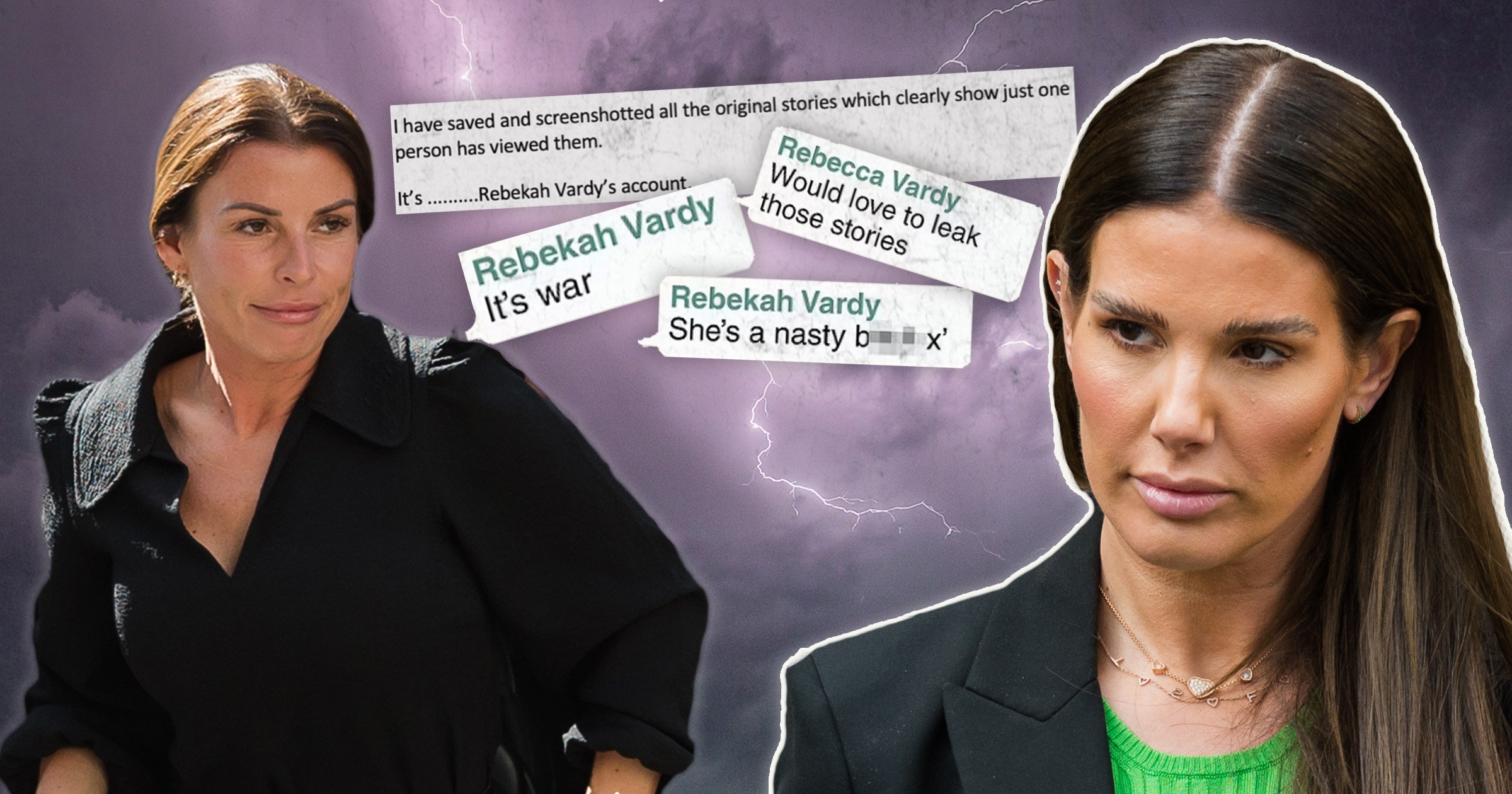 After a highly-publicised libel trial in May, which saw both Rebekah Vardy, 40, and Coolen Rooney, 36, attend the Royal Courts of Justice in London, joined by their husbands Jaime Vardy, 35, and Wayne Rooney, 36, judge Mrs Justice Steyn has published her ruling.

The legal battle between the pair came after Rooney accused Vardy of leaking ‘false stories’ about her private life in October 2019 following a months-long ‘sting operation’ which saw Rooney dubbed ‘Wagatha Christie’. Vardy vehemently denied the claims and sued for libel.

In her ruling, Justice Steyn said it was ‘likely’ that Vardy’s agent at the time, Caroline Watt, ‘undertook the direct act’ of passing the information to The Sun.

But she added: ‘Nonetheless, the evidence … clearly shows, in my view, that Mrs Vardy knew of and condoned this behaviour, actively engaging in it by directing Ms Watt to the private Instagram account, sending her screenshots of Mrs Rooney’s posts, drawing attention to items of potential interest to the press, and answering additional queries raised by the press via Ms Watt.’

The judge added: ‘In my judgment, the conclusions that I have reached as to the extent to which the claimant engaged in disclosing to The Sun information to which she only had access as a permitted follower of an Instagram account which she knew, and Mrs Rooney repeatedly asserted, was private, suffice to show the single meaning is substantially true.’

The battle centred on the now infamous line Rooney used in October 2019 to reveal the account allegedly responsible for the leaks: ‘I have saved and screenshotted all the original stories which clearly show just one person has viewed them.

Vardy, 40, vehemently denied leaking stories to the press and sued the fellow footballer’s wife for libel, but Coleen defended the claim arguing that her post was ‘substantially true’.

Over seven days in courtroom number 13, the two footballers’ wives each gave evidence as revelations from the case made daily headlines across the British press.

Justice Steyn found that Vardy’s evidence in the trial was ‘manifestly inconsistent’ with other evidence on ‘many occasions’.

In her judgment, she said: ‘It was evident that Mrs Vardy found the process of giving evidence stressful and, at times, distressing. I bear in mind when assessing her evidence the degree of stress she was naturally feeling, given the high-profile nature of the trial, the abuse that she has suffered since the reveal post was published, and the length of time she was in the witness box.’

The judge added: ‘Nevertheless, I find that it is, unfortunately, necessary to treat Mrs Vardy’s evidence with very considerable caution.

‘There were many occasions when her evidence was manifestly inconsistent with the contemporaneous documentary evidence, e.g. in relation to the World Cup 2018 and the photoshopped pictures, and others where she was evasive.’

‘This inevitably affects my overall view of her credibility, although I have borne in mind that untruthful evidence may be given to mask guilt or to fortify innocence.’

During the trial the court was shown screenshots from Rooney’s private Instagram revealing the fake stories she had planted, such as her allegedly travelling to Mexico for a ‘gender selection’ procedure, as well as planning to return to TV, and the basement flooding at the Rooney family home.

Rooney’s barrister David Sherborne argued that Vardy had a ‘habitual and established practice’ of leaking information about those she knew – through her friend and former agent Caroline Watt – to The Sun newspaper.

The Sun newspaper runs a number of articles about Rooney, including that she travelled to Mexico to look into baby ‘gender selection’ treatment, her plan to revive her TV career and the flooding of her basement.

Rooney shared a statement to her public-facing Instagram and Twitter, alleging that her fellow WAG Vardy had been selling fake stories to the press.

In a rather genius plot, Rooney revealed that she had been sharing fake stories to her own Instagram stories after suspecting that one of her followers was leaking tales from her private account to the press.

Saying of her suspicions someone had been selling the stories to the tabloids, Rooney went on, in what has now become pop culture canon: ‘I have saved and screenshotted all the original stories which clearly show just one person has viewed them. It’s…… Rebekah Vardy’s account.’

Vardy immediately fired back with her own statement, denying she had leaked any stories.

In a tearful appearance on ITV’s Loose Women, Vardy – who previously said she wanted a forensic investigation into the leaks – says the stress of the dispute caused her to have severe anxiety attacks and she ‘ended up in hospital three times’.

Rooney says in a statement that she does not want to ‘engage in further public debate’.

Vardy’s lawyers allege she ‘suffered extreme distress, hurt, anxiety and embarrassment as a result of the publication of the post and the events which followed’.

November 19-20, 2020: The libel battle has its first High Court hearing in London

A judge rules that Rooney’s October 2019 post ‘clearly identified’ Vardy as being ‘guilty of the serious and consistent breach of trust’.

Mr Justice Warby concludes that the ‘natural and ordinary’ meaning of the posts was that Vardy had ‘regularly and frequently abused her status as a trusted follower of Mrs Rooney’s personal Instagram account by secretly informing The Sun of Mrs Rooney’s private posts and stories’.

February 8-9, 2022: A series of messages between Vardy and her agent Caroline Watt are revealed at a preliminary court hearing

The court is told Vardy was not referring to Rooney when she called someone a ‘nasty bitch’ in one exchange with Watt.

February 14, 2022: Rooney is refused permission to bring a High Court claim against Watt

Rooney wasn’t granted permission to bring a claim against Watt for misuse of private information to be heard alongside the libel battle.

A High Court judge, Mrs Justice Steyn, says the bid was brought too late and previous opportunities to make the claim had not been taken.

The High Court is told Watt will not give evidence at the then-upcoming libel trial, as the case returns for another hearing.

The agent revokes permission for her witness statement to be used, and withdraws her waiver which would have allowed Sun journalists to say whether she was a source of the allegedly leaked stories.

April 29, 2022: Rebekah Vardy ‘appears to accept’ that her agent was the source of allegedly leaked stories

Rooney’s barrister David Sherborne tells the High Court, Vardy ‘appears to accept’ her agent Watt was the source of the allegedly leaked stories, and argues that a new witness statement submitted by Vardy suggests Watt was the source.

Vardy claims she ‘did not authorise or condone her’.

Vardy’s lawyer Hugh Tomlinson says the statement did not contain ‘any change whatever in the pleaded case’, with her legal team having no communication with Ms Watt.

Vardy and Rooney come face to face in court as the trial of their libel battle takes place at the Royal Courts of Justice in London before Mrs Justice Steyn. Both women give evidence, as revelations from the case make daily headlines across the British press.

Day One – The Chipolata

The first day of the trial ends with Mr Sherborne dramatically revealing a News Of The World article in which Mrs Vardy talked about a claimed sexual encounter with singer Peter Andre. The barrister reads the headline to the court, saying: ‘Peter’s hung like a small chipolata, shaved, slobbery, lasts five minutes’. Mrs Vardy responds by saying she was ‘forced into a situation’ by her ex-husband.

Outside the case, Mr Andre would later go on to address the article, voicing his upset the comments about his body were repeatedly brought up after 15 years.

An agreed 313-page bundle of evidence is released including pictures from Rooney’s Instagram account and screenshots where Vardy complained to her husband Jamie Vardy that she was being made a ‘scapegoat’ during Euro 2016.

However, Hugh Tomlinson QC, for Vardy, argued Rooney had ‘failed to produce any evidence’ that Vardy had ‘regularly and frequently abused her status as a trusted follower’ of her private Instagram account by passing on information from it to The Sun.

Mr Tomlinson said the libel battle was a ‘very simple case’ when ‘one clears away the conspiracy theories’.

Screenshots from Coleen Rooney’s Instagram were shown to the court during the libel battle.

He added: ‘Mrs Vardy’s case is and always has been that she did not leak the information nor did she authorise anyone else to leak.

The barrister added that Vardy suffered ‘very serious harm to her reputation’ as a result of Rooney’s post.

In one of the more shocking reveals during the trial, I’m A Celebrity…Get Me Out Of Here star Vardy was pressed about a former interview she gave to the News of the World about her alleged sexual encounter with Peter Andre, and in which she compared his penis to a chipolata.

The barrister read excerpts from the article, in which it was claimed Andre – who went on to address the controversy in an Instagam video in the days following – had managed ‘just five minutes of sex with Vardy’ and in which Vardy said he had ‘the smallest trouser equipment I’ve ever seen’ that was like a ‘miniature chipolata’.

Explaining why she did the interview, Vardy told the court: ‘I was forced into a situation by my ex-husband to do this.

‘It is something that I deeply regret… It is not nice to read and I understand why this is being used and to me this is mudslinging and I was also threatened with mudslinging by Mrs Rooney’s team.’

Because the trial wasn’t enough, the Wagatha Christie action will unfold on the small screen after it was recently announced that the drama will be turned into a TV series, which is sure to give Footballers Wives a run for its money.