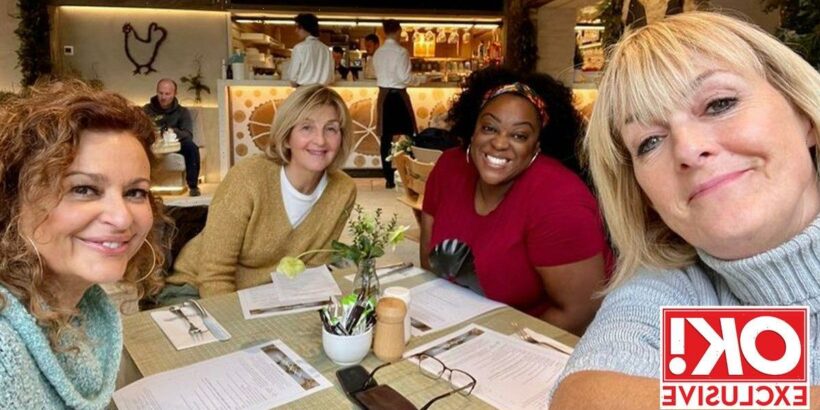 In her latest column for OK!, Judi Love opens up about her recent trip to the Cotswolds with some of her Loose Women costars.

The star – who recently appeared on Strictly – said she only saw one other Black person while away. Judi said: "I wonder if it’s the feeling of not belonging in the countryside or feeling as though you are going to stick out?" Sign up – for free! – to see what she has to say.

Are you an OK! VIP? If not, why not? It’s free and gives you backstage access to stories like this, exclusive home tours, special discounts and so much more! All you need to do is pop your email address below! P.s. if you’re already seeing this article in full, congrats – you’re already on our guest list!

Escape to the country

I recently had a few days away in the Cotswolds with my Loose Women colleagues, Kaye [Adams],Nadia [Sawalha] and Jane [Moore].

I don’t go to the country often; it was nice to have a break from the city. It did make me think about a potential move out of London, but I did only see one other Black person while I was there and it made me question why?

I wonder if it’s the feeling of not belonging in the countryside or feeling as though you are going to stick out?

I’d encourage people from all backgrounds to go to places you’ve not experienced before.

Stand-up is my first love

After my recent show at the Royal Variety Performance – I still can’t believe I met the Duke and Duchess of Cambridge! – I had another show at The London Palladium for Teenage Cancer Trust.

These two shows have reminded me how much I love doing stand-up. I’m loving all the TV work I’ve been doing this year, but stand-up is my first love.

I’m hoping I’ll get some time to write some new material in the new year.

It's December this week – where has this year gone?!

Workwise, it’s been a great year for me but, like a lot of us, I feel like I’ve been distracting myself with work and haven’t stopped to think about just how challenging this year has been.

I’ve experienced anxiety about there being so much I can’t control, like Covid-19 cases rising again.

I am looking forward to Christmas, although I won’t be putting up my decorations just yet – we usually wait until Christmas Eve.

Kyle Rittenhouse, a teenager who shot two people dead and injured another in August 2020, was acquitted last week. Rittenhouse had travelled from his home in Illinois to Wisconsin, where there were protests after the shooting of a Black man, Jacob Blake, by a white police officer.

Rittenhouse claimed self defence after shooting three people and was acquitted of all charges. President Biden has spoken out to say that the verdict “will leave many Americans feeling angry and concerned, myself included,” before adding, “We must acknowledge that the jury has spoken”.

I too feel uneasy at the verdict – it’s worrying and could set a scary precedent across the world.

Last week, Sir Rod Stewart opened up about how he had to “listen and learn” when his wife Penny Lancaster, 50, went through the menopause.

The singer, 76, said he found the experience frightening and revealed that he went away and did research to try and help his wife through it.

It’s refreshing to see such a big name talk openly about women’s issues – I hope it encourages other men to think about their partner’s health and what they might be going through, no matter what stage of life they are in.