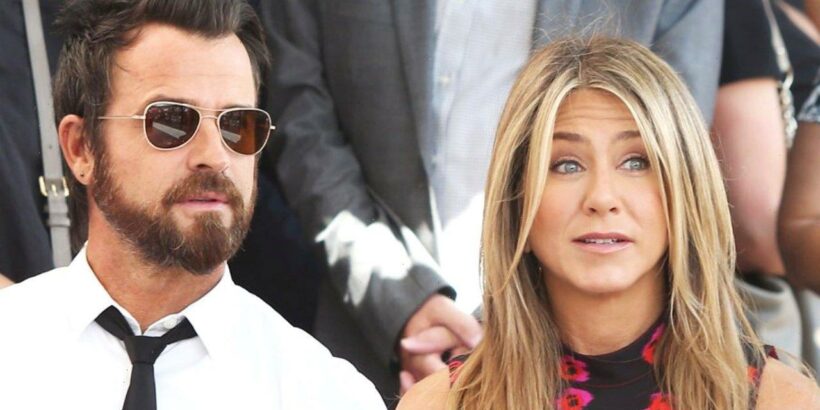 Commemorating the special day, ‘The Leftovers’ actor unearths a slow-motion clip that sees the Rachel Green depicter on ‘Friends’ seductively lighting a cigarette while sitting on a couch.

AceShowbiz –Justin Theroux is celebrating his ex-wife Jennifer Aniston‘s 53rd birthday. “The Leftovers” actor posted a sexy smoking video of the “Friends” star on social media before quickly taking the clip down.

Making use of his Instagram Story on Friday, February 11, the 50-year-old actor shared the slow-motion video that saw the Rachel Green depicter on the hit NBC series lighting a cigarette while sitting on a couch. She also rocked a sweatshirt with the words “I’m a cool blonde” printed on it.

Taylor Swift‘s song “Look What You Made Me Do” could be heard playing in the background as Jennifer tossed her blonde hair around. She then put her hands up high before making a head dip back.

Over the clip, Justin wished her a “Happy Birthday.” He also tagged Jennifer’s Instagram account. Going extra, Justin appeared to respond to Jennifer’s sweatshirt, writing, “Yes you are. Love u B!”

Fans have long speculated what the nickname “B” stands for, as the “On the Basis of Sex” actor continues to post about Jennifer with it. Many social media users also reacted to Justin’s cheeky post.

Despite going separate ways, it’s safe to say that there is no bad blood between Justin and Jennifer. Last August, Jennifer also paid a sweet birthday tribute to Justin with his shirtless photo.

Marking Justin’s 50th birthday, the “We’re the Millers” actress posted two photos of him on her Instagram Story at the time. In one photo, Justin could be seen posing shirtless while he appeared to be on vacation. “Truly one of a kind. LOVE YOU!” she captioned the snap.

Meanwhile, in another image, Justin looked dapper in a suit and tie with his dog Kuma sitting nearby. Over the picture, Jennifer added a caption that read, “Happy birthday, JT,” along with a partying face emoji.

Jennifer and Justin tied the knot in 2015. The former couple called it quits in 2017. When speaking to Esquire last year, the “Wanderlust” actor admitted that they remain friends. “I would say we’ve remained friends,” he told the publication.

Detailing how they maintained a good relationship post-divorce, Justin stated, “We don’t talk every day, but we call each other. We FaceTime. We text.” He went on elaborating, “Like it or not, we didn’t have that dramatic split, and we love each other.”

“I’m sincere when I say that I cherish our friendship. We can not be together and still bring each other joy and friendship,” Justin added. Gushing over Jennifer, he said, “Also, she makes me laugh very, very hard. She’s a hilarious person,” before pointing out, “It would be a loss if we weren’t in contact, for me personally. And I’d like to think the same for her.”