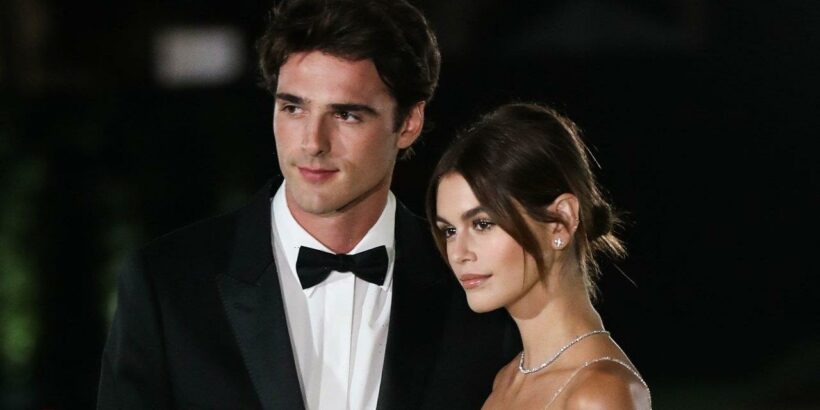 The 20-year-old supermodel and the ‘Kissing Booth’ actor arrive as a couple at the star-studded Academy Museum of Motion Pictures’ opening gala in Los Angeles.

AceShowbiz –Kaia Gerber and her boyfriend Jacob Elordi have made their relationship red carpet official. The supermodel and “The Kissing Booth” actor arrived as a couple at the star-studded Academy Museum of Motion Pictures’ opening gala in Los Angeles on Saturday, September 25.

For the ultra-glam event, the daughter of Cindy Crawford looked stunning in a sleeveless asymmetrical sparkling gold Celine gown. She completed her style with earrings and a necklace from Tiffany’s Victoria collection. She also added glam through the company’s Soleste ring and Embrace ring.

As for Jacob, the 24-year-old Australian hunk looked sharp while wearing a Celine black tux by Hedi Slimane. The couple looked happy that night as Kaia was snapped smiling from ear to ear while lovingly looking up at her beau.

The gala, which was also attended by Leslie Grace, Regina King, Spike Lee, Nicole Kidman, Katy Perry, Laverne Cox, Olivia Rodrigo and Cher among others, was co-chaired by Ava DuVernay, Ryan Murphy and Jason Blum. Sophia Loren and filmmaker Haile Gerima were the honorees. That night, Bob Iger, Tom Hanks and Annette Bening were also honored for their fundraising efforts for the museum.

The red carpet appearance arrived a year after the two started dating. The young lovebirds confirmed their romance as they went Instagram official last Halloween. They also showed PDA at her 20th birthday part earlier this month.

Speaking with Vogue in May, Kaia said of her relationship, “Being able to be with someone I trust, where we don’t want anything from each other, having a safe, steady relationship like that, has really opened my eyes to the possibilities of love and what it feels like to love without conditions.” She went on to say, “Lust is touching other people or wanting them, but love is really seeing someone.”