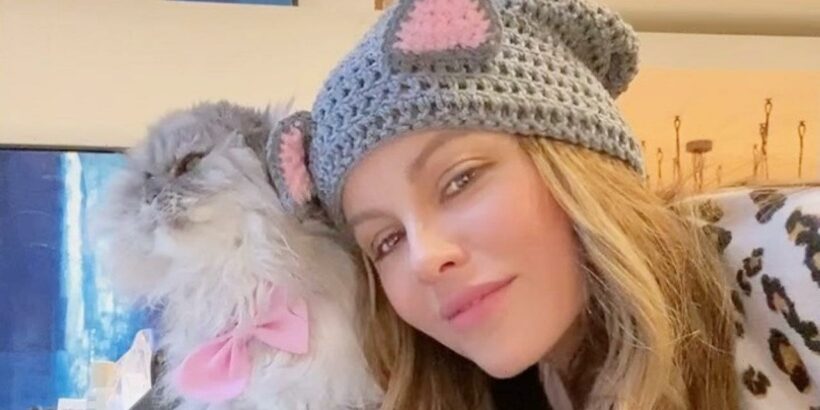 The ‘Underworld’ actress makes public Clive’s health issue when sharing an adorable clip on her social media account of her feline companion watching her on television.

The “Underworld” actress shared an adorable clip on Instagram of her pet Clive watching her on television as she opened up about his status as a social media celebrity.

In the video, she told Entertainment Tonight, “He’s really down to wear costumes, he’s down to do a little dance, he’s down to do some boxing. I guess everyone’s cat isn’t like that so people like seeing it. He deserves it. He’s a cancer survivor.”

“Yes, he had nine months of chemo, I didn’t think he was gonna make it. So, the fact that he’s become this minor cat celebrity, I’m down!”

Watching herself on her laptop, Kate squealed and kissed her pet moggy – who was dressed in a hat and bowtie – and showered him with affection while asking, “Who’s on TV?!”

Her followers were delighted, with many of them heaping praise on her furry friend. One joked, “He’s so underwhelmed I love it,” while another added, “Love ur beautiful cat [sic].”

And singer Wes Mack commented with a trophy emoji and wrote, “Rising Star right there. [the cat of course] [sic].”

Earlier this year, Kate delivered a perfect comeback after a troll accused her of trying too hard to appear “eccentric” with one of her cat snaps.

She had shared a funny photo of Clive in a baby sling, but some people didn’t find it amusing in the slightest. One follower commented, “You pride yourself on being eccentric, the whole thing smacks of to much effort [sic].”

She dryly replied, “Omg it’s too funny you saying that with that hair do [sic].”

And when another user compared her to “a sexy slender man,” she responded, “Literally what I was aiming for.”

She wrote, “Ingrid 2009-2020. Heartbroken. She fought so hard for months. Fly safe our sweetest sweetest girl.”