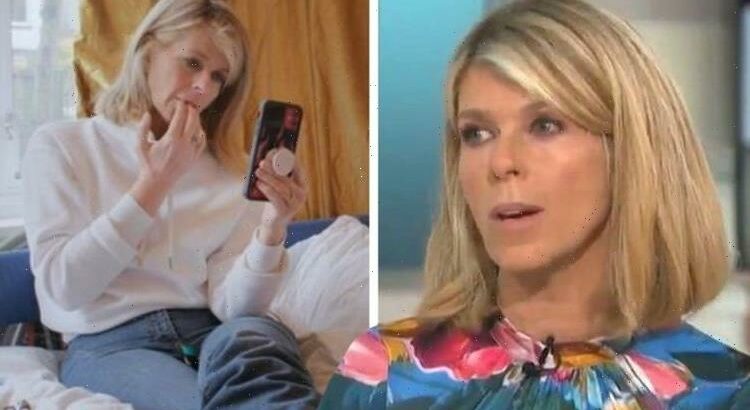 Kate Garraway, 54, became a household name in the UK throughout the coronavirus pandemic, as the brave Good Morning Britain presenter continues to care for her husband Derek Draper, the longest-suffering victim of the relentless illness. And her former ITV co-star Piers Morgan, 56, who believes he was struck down with the Delta variant after attending Wembley for the Euro 2020 final, had his pal on his mind throughout his two weeks of isolation.

Derek is the love of my life

Writing in his Daily Mail column about his experience with Covid, he penned: “The memory of what happened to poor Derek Draper, the husband of my former GMB colleague Kate Garraway, remains vivid.”

He also told readers that she had called in to check on him, as she knows all too well the affects of the illness.

Piers remembered her ringing up, chiming: “‘It’s the Patron Saint of Covid calling!’ she chuckled, self-mocking the fact that since Derek was taken ill, that’s pretty much all she’s been able to think or talk about either privately or publicly.

“Much has been said about her extraordinary stoicism under the most appalling stress and strain of her family’s ongoing nightmare – Derek is back home under 24/7 nursing care but is still effectively in a coma despite occasional hopeful glimmers of cognisant response – but honestly, people don’t know the half of it.”

He noted that Kate took him through her daily routine and it “exhausted” him just hearing it.

“I don’t know how you do it,” Piers had said before detailing her response.

“‘What choice do I have?’ she replied. ‘Derek is the love of my life.’

“Then, being Kate, she turned the subject back to me and my Covid experience.”

He revealed they joked about the fact his symptoms meant he couldn’t taste wine anymore, something he described as “one of my worst nightmares”.

And while quipping the debacle was like the end of the world for him, he added on a more sincere note: “‘I’ve been thinking about you guys so much in the past week. I’ve felt pretty awful with Covid but the vaccine may well have saved my life. Derek never had the chance to take one. That just seems so desperately unfair.’

“‘It is,’ she agreed, ‘but I just hope everyone who can take it, does. I wouldn’t wish what we’re going through on anyone.'”

Piers, who has been double-jabbed with the Oxford AstraZeneca vaccination, reflected on his own experience with Covid and compared it to that of others.

“Derek is three years younger than me and remains in a virtual coma 15 months after being rushed to hospital at the height of the first wave of the pandemic,” he wrote.

But The Royal College of Nursing (RCN) has said they will consider industrial action because the pay rise is not big enough, as the Chief Executive Pat Cullen, joined Kate and Richard Madeley on GMB last week to discuss how they are still calling for a 12 percent pay rise.

Kate, whose husband Derek received over a years worth of treatment from the NHS for coronavirus and is still receiving care at home, said she was “desperate” for nurses to be rewarded but understood the economic strain the country was currently under.

“Nobody could be more desperate for nurses to be rewarded than me,” Kate began

“Nurses, I think saved Derek’s life and are still very involved in keeping him alive because it’s the nursing care – as well, of course, the brilliant doctors – but that [nursing] care the during critical days and months that made all the difference.

“There are other areas who of the public sector, like police and teachers who have also been feeling huge amounts of pressure who have got no pay rise. So, 12 percent, I think you won’t get!” Kate told Pat. “There has to be some form of compromise.”

“This isn’t about pitching our nursing against our police service or against our teachers or anyone else, but there is no wealth without health, and you can’t have health without nurses staff – it’s as simple as that. It’s just plain and simple,” he exclaimed.