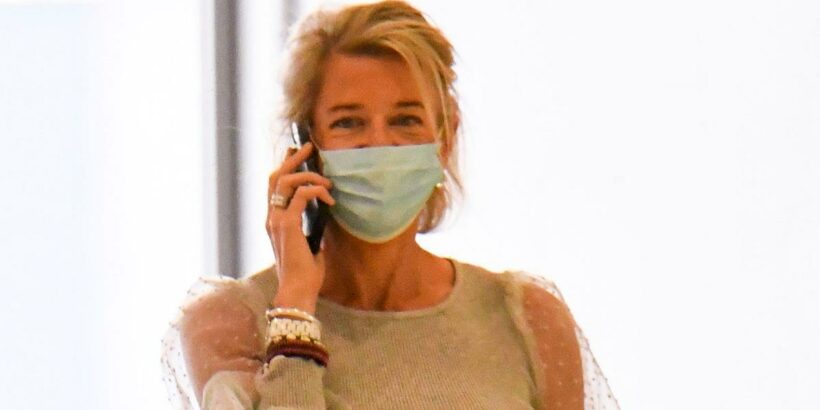 Katie Hopkins has been photographed at Sydney Airport as she was deported from Australia after boasting about violating quarantine rules.

The 46 year old landed in Australia last week to prepare to star on the country's version of Celebrity Big Brother when she filmed herself revealing how she planned to break the country's guidelines.

Posting the video from her hotel room, Katie said she planned to "lie in wait" for food to be delivered to her room so she could open the door "naked with no face mask."

She went on to claim that lockdown – which Sydney and Melbourne are both in – is "the greatest hoax in human history." Her comments led to The Apprentice star from being axed from the line-up of the upcoming series, having her visa cancelled and fined $1000 (£536).

Katie has now been spotted wearing a face mask while speaking on her mobile phone as she arrived at Sydney Airport ready to catch her flight back to the UK.

She wore a stylish grey top with mesh sleeves and ruffled cuffs as she waited to board her flight, speaking to an official on her way. Channel 7 confirmed her axing from the show on Sunday, writing in an official statement: "Seven Network and Endemol Shine Australia confirm that Katie Hopkins is not part of Big Brother VIP.

According to news.com.au, she said on Sunday: "It is despicable that anyone would behave in such a way that puts our health officials and community at risk.

"I have directed Australian Border Force to immediately consider the facts of this matter and urgently review whether this individual is complying with the requirements of her visa."

Australia's immigration minister Alex Hawke confirmed the border force and the police had launched an investigation into Katie's alleged behaviour in hotel quarantine.

He said: "With NSW & Victoria in lockdown, a reminder that temporary visa holders must obey public health orders.

"Australian Border Force is reviewing this matter. Where visa conditions are breached, individuals may face visa cancellation in accordance with the law."

A statement on behalf of NSW's police force added: "The NSW Police Force is working closely with Australian Border Force to ascertain whether the visa to enter Australia provided to a 46-year-old woman from the United Kingdom remains valid."

For the latest Katie Hopkins news, sign up for the daily OK! newsletter