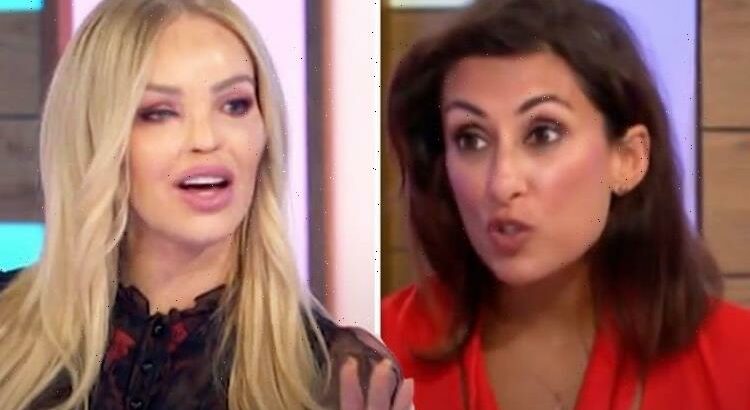 Loose Women: Katie Piper would have a third baby

Katie Piper, 37, made her debut as a panellist on the ITV daytime show Loose Women last month. She is the latest addition to the lineup after Saira Khan, 51, announced she had quit the programme in January.

In a candid new interview, Katie discussed how her Loose Women experience has been so far and said everyone is like “one big family”.

The presenter explained her fellow co-stars have been very welcoming towards her and said she is unaware of Saira’s experience.

The ITV chat show host said that securing the role has been a “bucket list tick” and was thrilled to be asked to join the team.

Addressing the show’s panellists, Katie said: “The women are exactly like you see on TV, they are really honest, warm and genuine a couple of them took me to one side and took me under their wing.

“They’ve all been really helpful and given me nuggets of wisdom. I think I’ve done the most shows with Nadia Sawalha and Linda Robson.

“Nadia is so kind she is like the mother hen and she is a real woman’s woman. Linda again is a really lovely person, for me, I was like, ‘Wow that’s Tracey from Birds of a Feather.'”

When quizzed about workplace tension between the cast, Katie dismissed the idea.

She continued to the Daily Star: “I didn’t even know that was her [Saira] experience but yeah it hasn’t been my experience at all.”

Katie added that everything had been going well for her and the show has a “family vibe”.

Upon leaving the panel, Saira revealed she could only “tolerate” some of the cast and had only kept in touch with four of them on a regular basis.

The mum-of-two has explained that while her decision to quit the daytime favourite came from a “mixture of things” and insisted she’d just outgrown it. Another reason was due to the “horrendous trolling” she and the rest of the stars receive.

“You’re on there discussing a subject with your friends in a very innocent way, but the amount of trolling you get online is horrendous,” Saira explained.

“It just becomes toxic for women. It’s a show for women but I don’t feel like it empowered me.”

Addressing her decision to quit the programme after five years, she added to The Mirror: “It was a mixture of things. Firstly, I’d outgrown the programme.

“There were some women that I just thought, ‘I’ve got to just tolerate you to do the job and in real life, you wouldn’t be my friend.'”

The TV personality took part in Strictly Come Dancing in 2018 where she was partnered with Gorka Marquez.

Katie is also a philanthropist and author and has written many books including Beautiful, Beautiful Ever After, Confidence, Things Get Better and From Mother to Daughter.