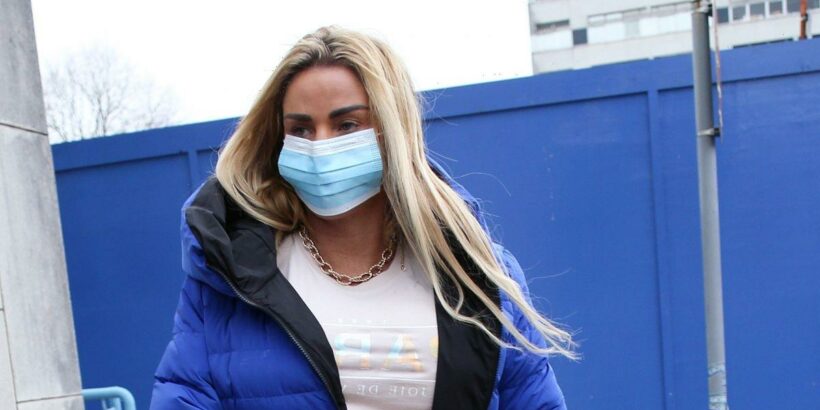 Katie Price has been pictured arriving at court for her sentencing hearing after she pleaded guilty to drink driving.

The 43 year old star cast a serious figure as she walked towards the entrance, her long blonde hair loose in the wind.

Katie faces a possible prison sentence after pleading guilty to drink-driving and admitting to taking drugs after crashing her BMW car.

The star was near her home in West Sussex at the time, with police responding to a call in the early hours of the morning on September 28.

The mum-of-five's face was mostly covered by a face mask and she was all bundled up for the cold, donning a long blue puffa coat to head into the court.

Underneath, Katie opted for a light pink logo'd top and a pair of casual white trousers, deciding on a pair of trainers for the appearance.

Katie also chose to bring her designer handbag and wore a gold chain link necklace to complete her outfit.

The reality TV star had also chosen not to wear her engagement ring for the appearance.

Katie was told at her last court hearing her sentencing would be delayed to December 15 so she could receive treatment at The Priory rehabilitation centre after the star admitted to drink-driving and taking drugs.

Katie, who was also banned from driving at the time of the crash, was ordered by a judge to undertake treatment in September.

She then entered The Priory rehabilitation clinic on September 29, before completing her stint of treatment on November 1.

For the latest showbiz reports and breaking news visit http://www.ok.co.uk/celebrity-news.

Check out all the latest hot topics on OK! magazine’s news section and discover exclusive celebrity news about your favourite soap actors and reality stars.

We're also on Facebook.com/okmagazineuk – for the latest online celebrity news, features, galleries and videos throughout the day from your favourite site.