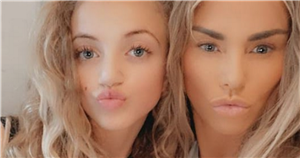 Katie Price was held at gunpoint while filming a reality show in South Africa with her two children, Princess and Junior, who she shares with ex husband Peter Andre.

Now, the reality star, who has ‘hired an exorcist to cleanse’ her mucky mansion as it’s ‘haunted by a little boy’, has revealed her eldest daughter, 13, still attends therapy three years after the terrifying moment back in 2018.

As the 42 year old mum of five relived the scary moment, she said the family had no security when they were filming the reality programme and Princess still worries about the incident to this day.

“Even Princess, because we got hijacked in South Africa at gunpoint, we thought we were going to die, but anyway. It was horrific, we were filming as well,” she admitted on The Fellas podcast.

“We had no security. She [Princess] had to have therapy as well because she would not get out of the car.

“If I was at the petrol station, even now, she worries.” Katie, who recently confessed she ‘loves’ being bankrupt as she shares plans for more kids with fiancé Carl Woods, went on to reveal that she has a protection dog called Blade to make Princess feel more at ease in everyday situations.

“So I got this dog. I mean, if you’re on Instagram… Protection Worldwide, I think they’re called, you’ll see our video on there because we had to show Princess how good the dog was.”

She explained further: “We had to make up a scenario where she’s playing with the dog in the garden and I’m sitting there and two men come with balaclavas on to try and take me out and kidnap me.

“You hear me shout, ‘Blade! Blade!’ And straight away the dog can see, fires straight at them, and obviously they have their arm protection and grabs them.”

The star added: “He won’t let go until I say ‘Blade, out!’ He’s that well trained.

It comes after Katie first spoke out about how the incident has had an effect on Princess with Annie Mac on her podcast Changes.

“Princess had therapy after that,” she said. “She still doesn’t like nighttime … there is a lot that has gone on with that.”

“I can’t even tell you how traumatic it was. We all thought we were going to die.”