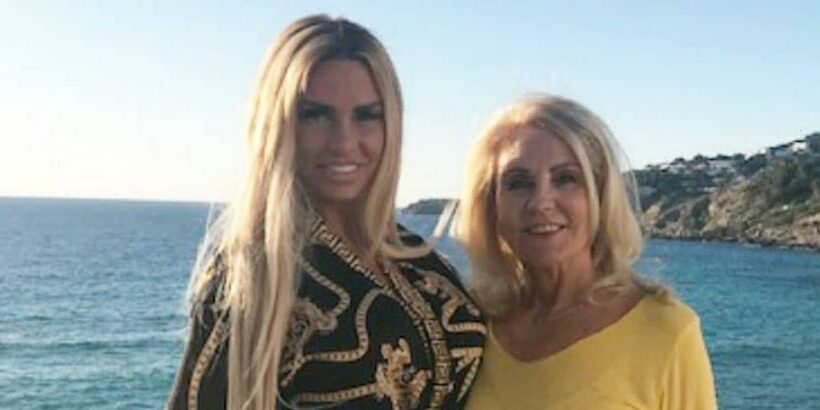 Katie Price's mum Amy has spoken out on the heartbreaking moment her daughter asked why she was still alive following her drink-drive crash in September 2021.

The 43 year old had a collision near her home in West Sussex in the early hours of the morning on 28 September and flipped her car. In December, she was handed a 16-week suspended prison sentence for drink-driving while disqualified and without insurance.

After the crash and before her court hearing, Katie went to The Priory for rehab for a month and has since vowed to have therapy every week for the rest of her life.

Now, in a BBC documentary that follows her 19 year old son Harvey's next steps at college, Katie's mum Amy, 70, has opened up on the "awful" moment the star asked "why am I still here" following her crash.

Amy, who has incurable lung condition idiopathic pulmonary fibrosis, said: "With Harvey, and his friends round him at school, they're not interested in anything that goes on outside that school. Whereas all your other kids, they might have comments from other children to put up with. I suppose from Harvey's point of view, that won't affect him.

"All he thinks about is just you. For me to have a phone call at 6.30 in the morning saying, 'I've just had a crash, I'm ever so sorry mum,' and it was unbelievable. We just couldn't believe it."

She continued: "And then I was speaking to this guy who actually got you out of the car and he was saying, 'I don't know how she survived this'. When you say to me at the time, 'Well, why am I still here?' It's awful for a mother to hear that."

Katie replied by explaining there's "no one to blame" but herself for getting into the car under those conditions. She shared: "But that night I got in the car, if people saw me and knew what was going on in my head, I wasn't telling myself at the time, 'Don't get in the car' I was like, 'No, I just need to go'.

"So yeah, I'm lucky nothing happened. I'm lucky. There's consequences that I have to put up [with] from that night now. "So I've made a promise – because I've never done this before – that I'll go see a therapist once a week.

"I just need to learn to cope when these situations happen because I don't want to go into self-destruct."

Her mum then said the family has had to "step up" to take care of Katie and "protect" her after all that's happened. She added: "But can you imagine if anything had happened to you in that accident? How do you think Harvey would have coped?"

Amy couldn't help but cry as she went on: "That's why I know – for you to do what you did do – it must have been something dreadful."

Katie Price: What Harvey Did Next airs next Monday at 9pm on BBC One

For all your updates on Katie Price and her family, sign up to our daily OK! newsletter.