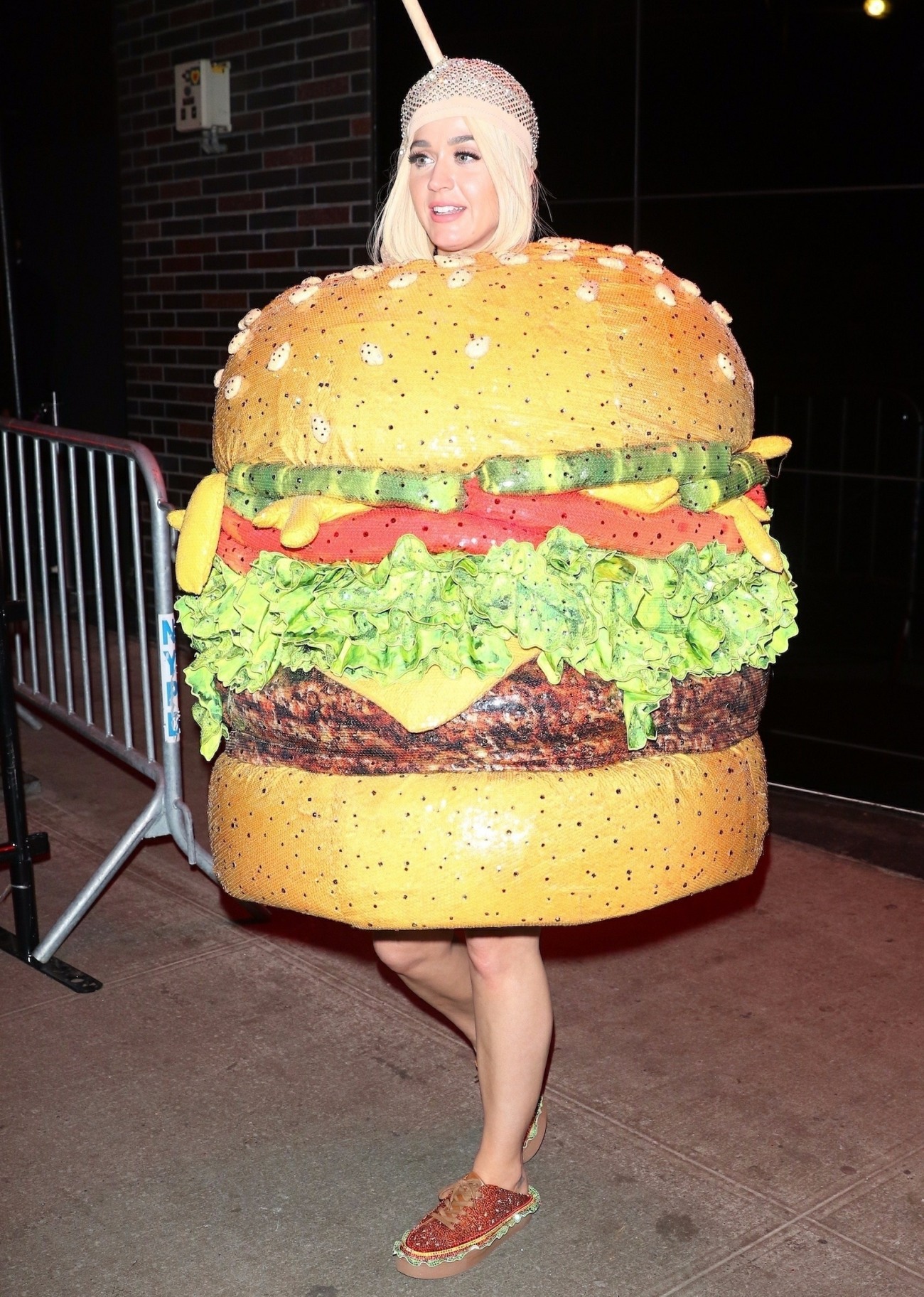 Most celebrities go out and party after the Met Gala. There are probably a dozen major afterparties around New York following the gala, and many celebrities change into more comfortable ensembles post-gala. Not Katy Perry. Katy was dressed like a friggin’ chandelier at the Met Gala, then she changed into a hamburger costume for the afterparties. Which was more comfortable, I wonder? It did make for some funny moments though – Katy ran into Lizzo, who laughed and asked her “are you a f–king slider?” I’m also including photos of Katy running into Celine Dion on the street and Celine was trying desperately to give the Katyburger a big hug. This also happened to Katyburger:

Met Gala fashionistas feasted their eyes in amazement on Katy Perry, who wiped out in a giant hamburger costume at Gucci’s wild after-party — and then was unable to get back up. Perry took the gala’s camp theme to the next level by changing into a burger costume late Monday night, complete with all the trimmings — bun, beef patty, lettuce, tomatoes, pickles and cheese, plus a toothpick hat — from which the singer’s hands only partly protruded.

Witnesses said Perry was so encased in the burger ensemble that others were forced to help feed her because she couldn’t reach her mouth. But despite being encased in a Jeremy Scott-designed barrel of rubber, Perry didn’t hold back on the dance floor at the late-night after-party at Hunter College’s basketball court. She was seen dancing with pals including model Karlie Kloss, enthusiastically shimmying her oversize slider and bumping the burger up and down to beats from DJ Mark Ronson.

That is, she did until around 1 a.m., when Perry fell flat on her buns on the dance floor, and lay there motionless, unable to get back up, while her little legs were seen wiggling out of the bottom of the whopper of a costume. Two partygoers came to the aid of the stricken star, hauling her back to her feet, before Perry wobbled away.

An eyewitness said, “It was the funniest thing I’ve ever seen. Katy . . . just toppled over. Once she was on the floor, she couldn’t get up . . . She rolled around a little, but she was stuck because she had no arms. People rushed over and literally picked her up.”

Page Six has a way with imagery, right? “…Her little legs were seen wiggling out of the bottom of the whopper of a costume…” Just the thought of the Katyburger lying there, flat on her lettuce, trying to figure out a way to get up. It’s perfect.

Meanwhile, the gossip is that Jeremy Scott – who designed Katy’s hamburger costume and her chandelier costume – threw a bad afterparty at the Playboy Club. One person called it a “disaster” and another called it a “debacle.” 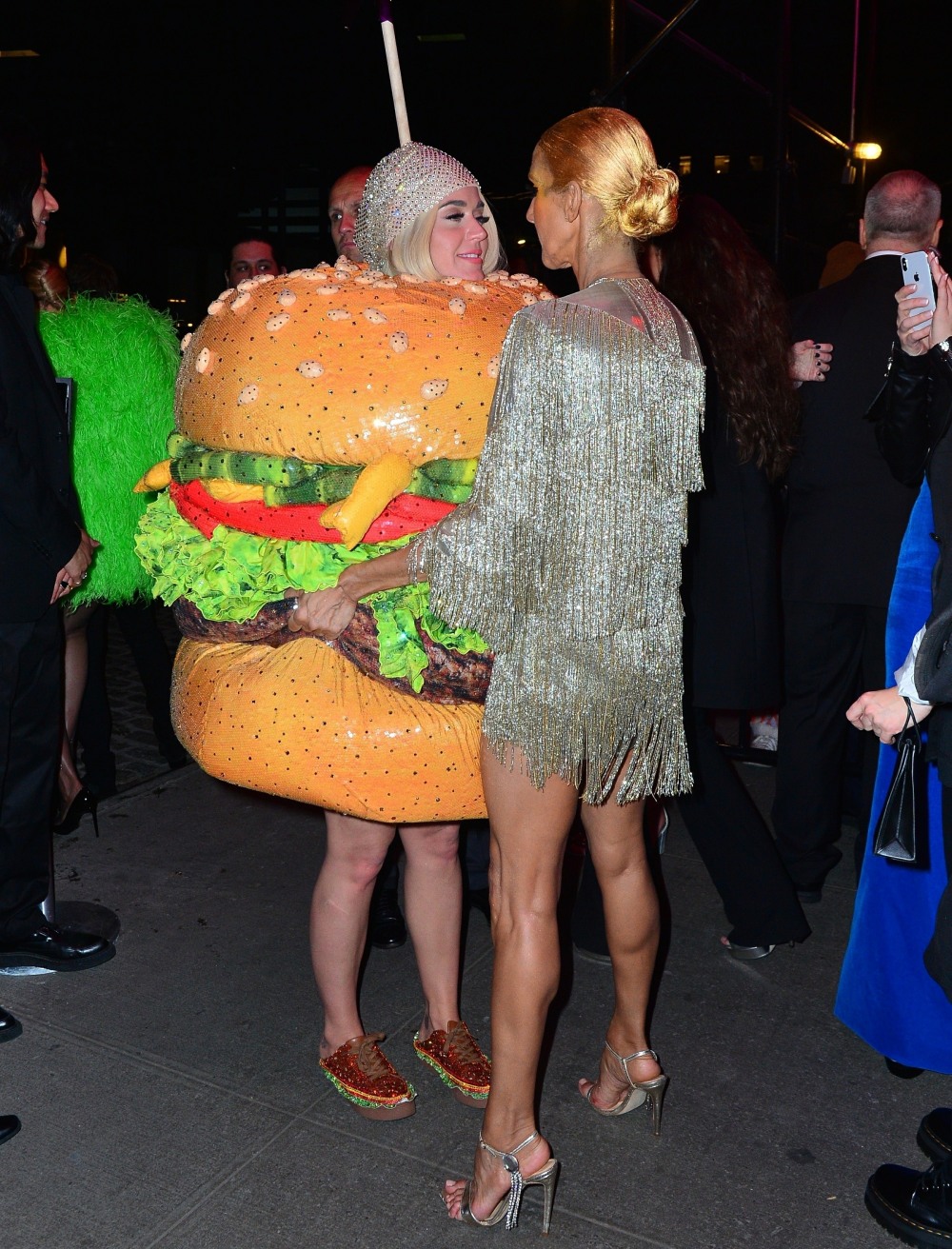 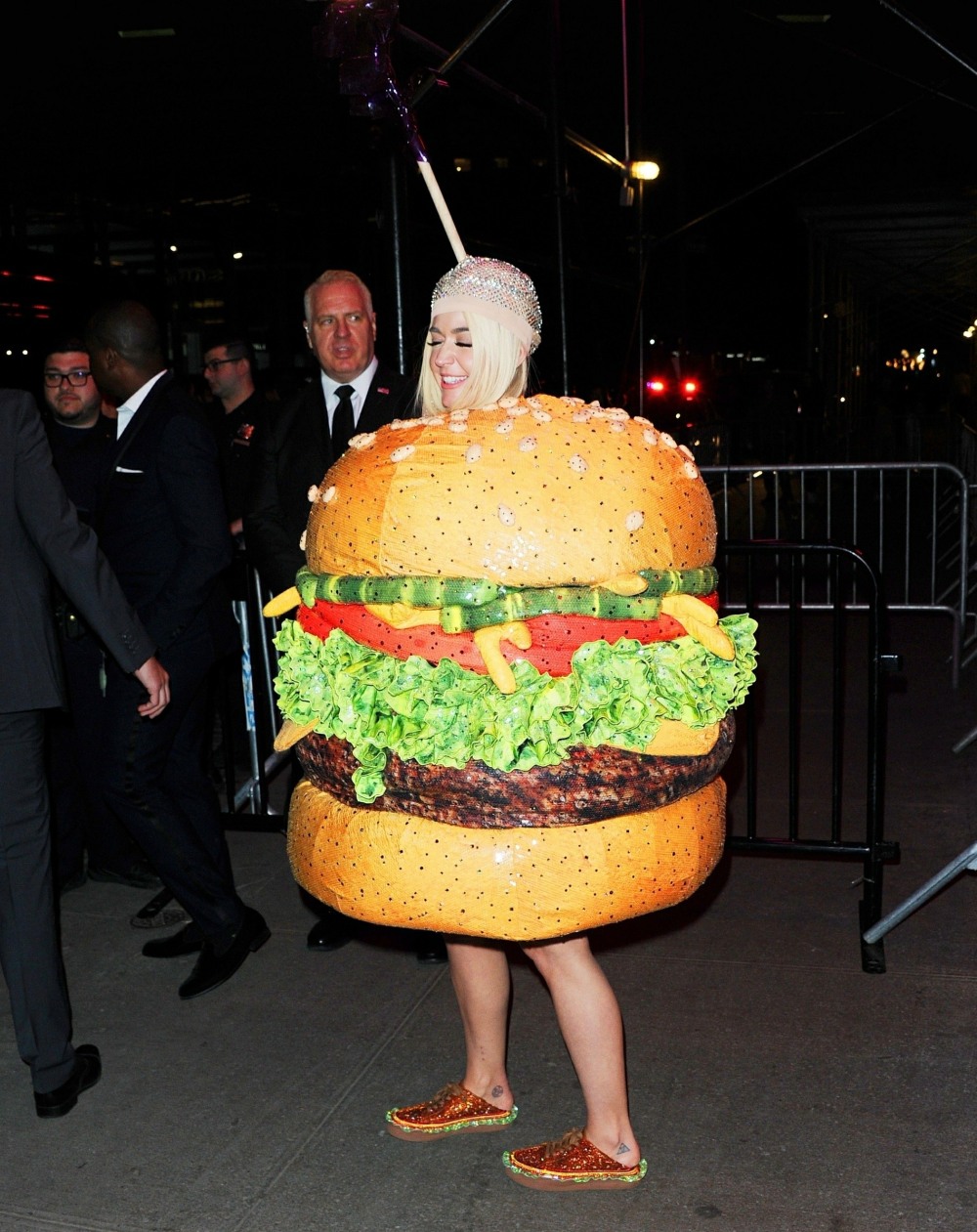