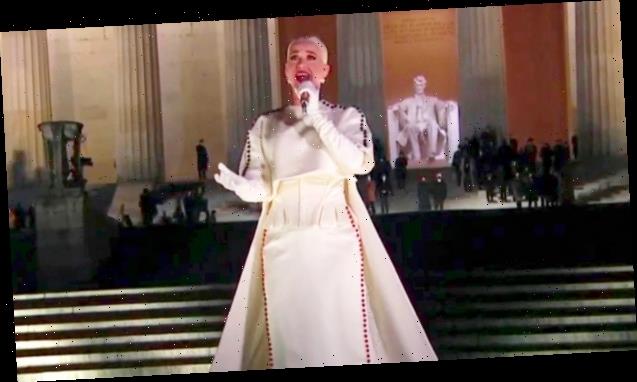 The Celebrating America inaugural special closed out with an epic fireworks display over Washington, D.C. after Joe Biden and Kamala Harris‘s inauguration on Jan. 20. So, it was only appropriate that the singer of “Firework” was chosen to perform against this pyrotechnics show: Katy Perry! The pop star looked incredible nearly five months after welcoming her first child with Orlando Bloom while singing her 2010 hit, “Firework,” by the Lincoln Memorial Reflecting Pool and Washington Monument.

The pop star stunned in a custom ensemble from Thom Browne, and the all-white outfit reflected the Washington Monument that served as her performance’s backdrop. The high-fashion look — which featured a cashmere coat, a silk satin corset and floor-length skirt, elbow-length gloves and a creamy train of luxurious fabric — also complemented Katy’s platinum white hair. Buttons covered in red silk satin added a pop of color to Katy’s regal performance costume.

Katy followed on the heels of incredible performances from John Legend, Jon Bon Jovi, Justin Timberlake and Ant Clemons, Demi Lovato, Dave Grohl and the Foo Fighters, and more. Unlike these performers, though, Katy’s participation in the televised event was announced a bit last-minute. 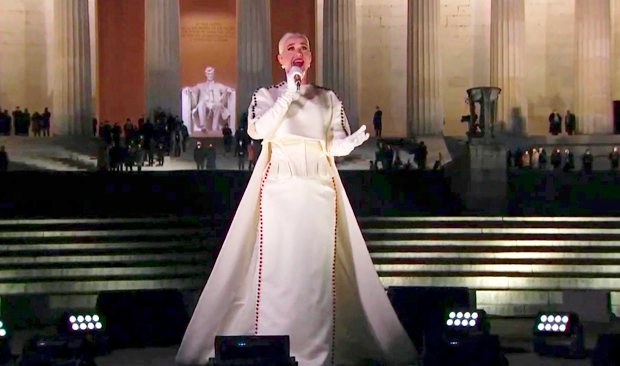 On the eve of Inauguration Day, which fell on Jan. 19, the “Roar” singer tweeted a photo of four patriotic microphones: one looked like the Statue of Liberty’s torch; another was embellished with silver stars; the third was bedazzled to look like the United States flag; and the fourth was plain white. Although Katy kept her caption ambiguous, the Presidential Inaugural Committee retweeted the photo, making it clear that she would be joining the inauguration activities.

It’s no surprise to see that Katy was invited, though. Singing at political events isn’t new to Katy, who also performed her hits “Rise” and “Roar” at the 2016 Democratic National Convention to show her support for Hillary Clinton, who at the time was running against Donald Trump. So, Katy was understandably more than happy to sing at an event that also served as a farewell to Trump’s time in office.