The 2018 Met Gala is already one for the books. The event’s religious theme inspired some of the best looks the world has seen since the benefit’s inception — and one of the most dramatic entrances of the night came (of course) from Katy Perry. And now these memes about Katy Perry’s 2018 Met Gala look are seriously too funny.

This year’s theme for the evening (and subsequent exhibit that’s opened as a part of the Gala) is called, “Heavenly Bodies: Fashion and the Catholic Imagination.” The exhibit is meant to "examine fashion’s ongoing engagement with the devotional practices and traditions of Catholicism," according to the museum’s site. The official dress code of the night for celebrities and designers is to don "Sunday’s Best" clothing, which can be interpreted wildly differently depending on your point of view.

So when it came time for Perry to decide what to wear for the event, she decided to go the costume, show-stopping route with her look. Perry arrived at the Met steps in a white vintage Rolls Royce, wearing a serious pair of massive angel wings. Can we say "extra?" 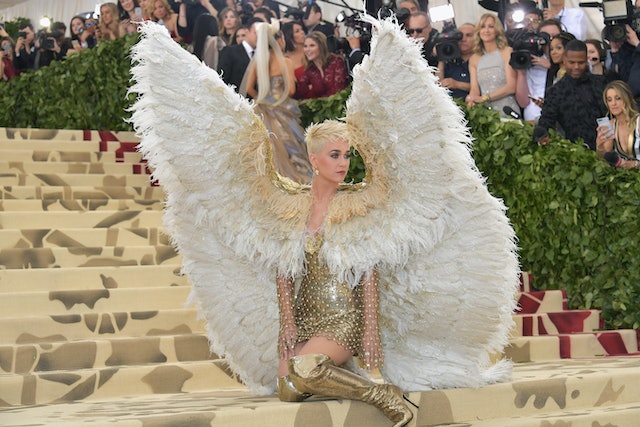 And the commotion that she caused — both on the red carpet and on social media — has Twitter users screaming over how over-the-top this look it.

Out of all the looks seen tonight, I think that Perry’s tops the list of largest and boldest fashion choices. Underneath the angel wings, Perry wore a simple gold and white minidress with gold chain embellishments cascading down her arms, gold thigh-high boots, and her signature platinum blonde pixie cut topping off the look. Her ensemble is a custom design made entirely by Versace, and the wings reportedly span a whopping six feet in length.

How Perry plans on sitting down for dinner, I have absolutely no idea. But I hope that she has some sort of exit strategy for those wings so that she can enjoy the full itinerary for the night. If she takes one spin on the dance floor with those wings on, she’s definitely guaranteed to take out a couple of people in her tracks.