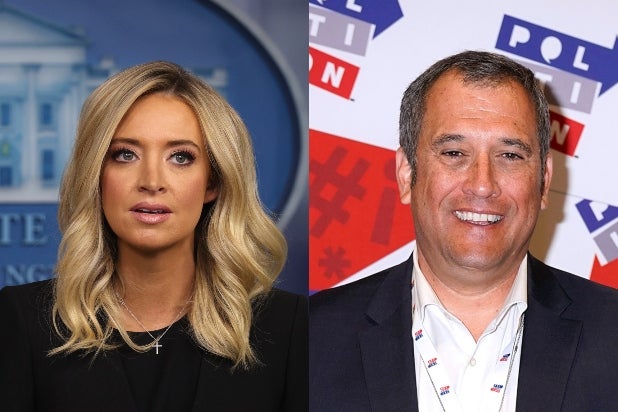 Complaining about what she sees as “a double standard in the media,” the White House press secretary said on Fox News, “If you’re a Democrat woman who comes into the West Wing behind me, who takes that podium, your biggest concern outside of your official duties is the next glowing profile written about you. If you’re a female woman in the Republican party who takes that podium, guess what your worry is? Having a Playboy reporter shout questions at you, demeaning, misogynistic questions during a briefing.”

She went on, “It’s a double standard. It’s one that’s ridiculous and one that the White House Correspondents Association should look into, when you have Playboy reporters shouting at women in a misogynistic manner simply because they’re a member of the GOP.”

It was not immediately clear what misogynistic questions the press secretary might be referring to in the “Fox & Friends” interview.

Karem responded via Twitter and called McEnany’s interview “lame.” He wrote, “Speaking truth to power is not misogyny. You work for a misogynist. Your briefings are propaganda. You failed the American people who pay your salary. You’re sore because you can’t answer questions honestly.” He added, “You should be more worried about The Hatch Act and being investigated for sedition.”

In September, the first time McEnany dubbed Karem the “Playboy reporter,” Hugh Hefner’s son Cooper Hefner interpreted it as pretty dismissive and tweeted a response of his own.

He tweeted, “How strange watching @PressSec try to discredit @BrianKarem‘s question by repeatedly referring to him as the ‘Playboy Reporter.’ Given her boss, the President, was on the cover of the magazine and idolizes my father in unhealthy ways, it isn’t the gotcha moment she thinks it is.”

Check out McEnany’s Fox News interview and Karem’s response, below: