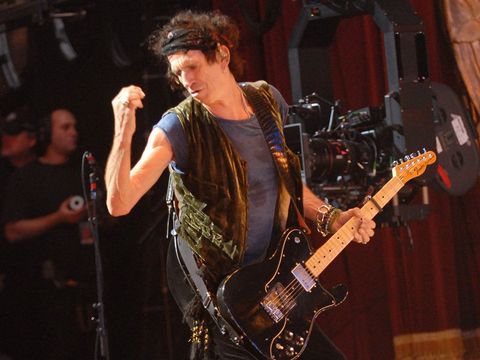 Keith Richards has been more or less synonymous with drinking too much and general debauchery in his 50-year-plus music career as a guitarist in The Rolling Stones. But he’s made a surprising move in his 74th year on this earth: He’s gone sober.

Well, maybe not completely, but Richards is no longer knocking back bottles of Stoli like he used to. He’s seriously cut back on his drinking for “about a year now,” he told Rolling Stone in a new interview ahead of the band’s U.S. No Filter tour dates. “I pulled the plug on it. I got fed up with it.”

Fellow Stones guitarist Ronnie Wood chimed in with his support, opening up about his own substance abuse issues and turn to sobriety in 2010.

Richards admits that he still has “a glass of wine occasionally, and a beer,” which sounds puritanical in comparison with the Richards we’ve known for so long, who would somehow pull off virtuoso guitar work live while blitzed. But alcohol apparently finally took its toll.

“It was time to quit,” he added. “Just like all the other stuff.”

When asked if it’s been an adjustment in his lifestyle, the always succinct guitarist responded with a laugh. “You can call it that, yeah.”