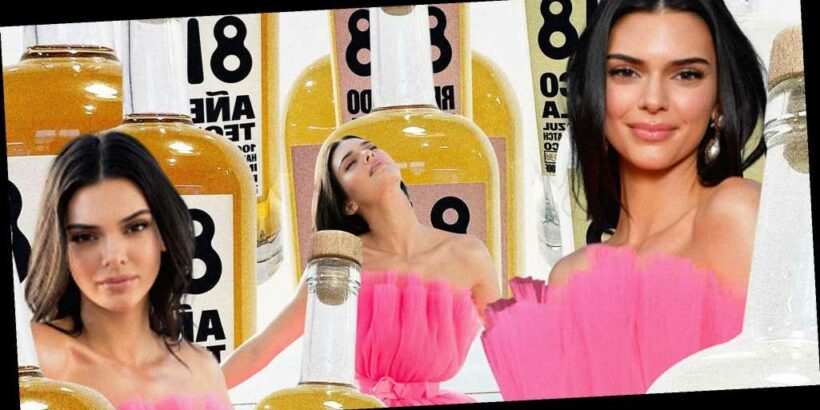 On Tuesday, Kendall Jenner announced her latest venture: 818 Tequila, a small-batch brand Jenner claims is the end result of a 3.5 year "journey to create the best-tasting tequila."

Almost immediately, the news was met with outrage. In her announcement videos posted to Instagram, Jenner sips tequila on ice from a highball glass, to the chagrin of tequila aficionados worldwide — but that's not the worst of it.

A Diet Prada post about the launch called attention to concerns Mexican and Latinx people have about Jenner's product, including charges of cultural appropriation, and fears that workers who harvest agave and make the tequila might be exploited. There is also some concern that a celebrity tequila trend is causing real harm to the agave-producing region of Mexico.

In the comments of Diet Prada's post, though, some people wondered about whether the outrage was just another case of Kardashian-Jenner haters looking for a reason to criticize the family. Many made the point that Kendall is hardly the first celebrity to dip a toe into the spirits industry, asking different versions of, "What about George Clooney? Nick Jonas? Dwayne the Rock Johnson?"

"I understand the point of the discussion around appropriation," reads one comment, "but if we're going to have it, let's make sure it's appropriately inclusive of all the wrong-doers."

For those of us who deeply appreciate tequila without quite understanding the process of making it, I spoke to Patron's Antonio Rodriguez, the Mexico-based director of production, and Lucas Assis, an L.A.-based tequila expert and bartender. Each helped to break down why the celebrity tequila craze is problematic for the industry, and how Kendall Jenner's 818, specifically, became the brand to release the floodgates of outrage.

The allegations of appropriation boil down to tequila's main ingredient, agave, and that its importance extends well beyond booze in Mexican culture. "People outside of Mexico don't know how embedded tequila and the agave is in their culture," says Assis, referencing the centuries-old uses of agave in food and drinks dating back to the ancient Mayans. "And when you come from the outside with only the intention to make money off of this thing that's so important — without any regard or any real knowledge or any respect to that culture — it's cultural appropriation."

While we can't know Jenner's intentions, a lack of knowledge is visible not just in her cringe-inducing sip of tequila on the rocks (a no-no, according to many tequila experts), or her extremely vague commentary while doing the tasting ("strong" is not a "real tasting note in a tequila," says Assis). It's also right there in the branding.

"It's not 'blanco tequila,'" adds Assis, referring to the 818 bottle labels, "it's 'tequila blanco.' She just misspelled the Spanish … they all say 'reposado tequila,' 'añejo tequila.' Tequila is the first word, and then it's blanco." This is simple Spanish grammar you'll see on everything from Jose Cuervo to Espolón bottles you might have on your bar at this very moment.

"[That] screamed to us tequila people that she didn't really know what she was talking about," he notes.

This is not to say that all tequila-makers must be Mexican; Assis notes it's possible to gain that understanding and respect of culture as an outsider, too, and the brands that do it best showcase the people actually making the product.

"For example, Del Maguey Mezcal — it's owned by Ron Cooper. He's an artist here from L.A., but he's been going to Oaxaca for ages. He was probably one of the first people to actually bring Mezcal to the U.S." Rather than use his name to market the brand, "it's absolutely all focused on the people that make the Mezcal, the single villages that make the Mezcal, what kind of Mezcal it is," says Assis. "So what he's giving these people, it's just a platform to showcase things that they have been making with their family for three, four generations. There is a way to be involved with the business and not exploit the culture, and actually showcase the culture."

"In 2020, the tequila category grew 65%, which outpaced the growth of the overall spirits category," notes Rodriguez, referencing Nielsen data on the subject. Much of the growth in sales was attributed to the pandemic and the experimentations of at-home amateur mixologists. In 2020, the Rock launched his hugely popular brand, Teremana, but Rodriquez says "the celebrity tequila craze has been at an all-time high" going on four years now.

What's important to note, he says, is that many of them do not have their own production facilities — and when a celebrity spirit is essentially being mass produced with other brands, it is easily traceable.

Every bottle of tequila has a "NOM," a four-digit number assigned by the Consejo Regulador del Tequila (CRT) that tells you where it's made, and exactly what other tequilas are made there. Both Teremana (Dwayne Johnson's brand, NOM 1613) and Patron (NOM 1492), for example, show that they are the only brand made at their distilleries. Jenner's 818 (NOM 1137) is produced at a distillery responsible for more than 60 other brands.

Assis names 1137 as one of two distilleries responsible for most celebrity tequila. "Basically they just make barrels and barrels and barrels of tequila, and celebrities come in and literally pick a barrel. So there might be a little bit of a difference [between brands], like this one is aged in French oak and this one is aged in American oak … But essentially it's exactly the same bottle, and the celebrity just buys that, and then they just use their marketing and their branding to sell it to you." Obviously with a markup that makes it seem like a very unique and special Mexican product. But, Rodriquez adds, "What you're paying for is the celebrity affiliation, and not the quality of tequila."

When all is said and done, it's Kendall who will be taking home the profit. While we have no idea how much the workers at the distillery that produces 818 are paid, overall, salaries are low relative to the cost of agave itself, which "has skyrocketed over 1,000% in the last 20 years," says Assis. "The salary for the jimadores, which are the people that are in the field every day, cutting themselves while trying to cut the leaf of the agaves to get to the piñas where the sugars are — their salary hasn't gone up."

While it's impossible to say for sure that the surge in celebrity tequila has caused the shortage of agave, it certainly has not helped, either. "The increased popularity of tequila in recent years has put intense pressure on tequila makers to produce more tequila, faster," says Rodriguez. Agave that should be harvested at eight to nine years old is now being picked at only three to four years, he explains. "Which means there's just not going to be enough sugar." Both experts say these shortcuts are corrected later with additives, making less pure, lower-quality tequila.

Of course, with increased demand comes increased prices — meaning that some of the smaller distilleries who can't afford the skyrocketing cost of agave are the ones to suffer. "It's hard for them to even keep up [and] be able to use the material," says Assis. In a 2018 Reuters report, Salvador Rosales, manager of smaller producer Tequila Cascahuin, worried that the soaring price of agave would see customers turning to cheaper alternatives, like vodka and whisky. "If we continue like this, a lot of companies will disappear," he said. In the same report, one agave producer said that plants were being stolen in the middle of the night.

"I do think that celebrity tequila makes a huge part of [the agave shortage] because of the demand associated with them," says Assis. "Like Teremana, for example, they broke all the records of sales for last year … That's where most of the agave is going. So, yeah, there's definitely a correlation between how tequila is just exploding now and the shortage of agave."

This is a problem that can't necessarily be solved by just growing more agave. Rodriquez clarifies that in order for tequila to be legit, it must be made with Weber Blue agave, and grown in one of four states in Mexico in areas registered by the CRT.

Why are we coming for Kendall Jenner?

The Kardashian-Jenner clan's history of cultural appropriation (from Kim Kardashian's attempt to name her brand of compression garments "Kimono" to the many, many, many times the family has been accused of appropriating Black culture) made Kendall's attempt to infiltrate the tequila market a bit cringe-inducing in and of itself. But it really comes down to exposure. Within minutes of her post, I had heard about Kendall's tequila brand. Two years after the fact, I had no idea that Nick Jonas also had a tequila brand. (Sorry, Nick.) It's not so much that people were holding Kendall accountable and not others, it's that she's the most visible face of the issue. The scrutiny should have been there all along.

With 152 million Instagram followers, Kendall's reach is unparalleled (that's not including her family's individual accounts, which will likely support 818 and increase her reach even further). In a market already facing a crisis, the thinking goes, this onslaught of demand will only serve to make Kendall richer, while gutting the industry, and specifically Mexican, family-owned small scale facilities, in the process. Even if she began her "journey" almost four years ago, she wouldn't have been blind to the current climate of the industry.

"I do think that by now these celebrities should know that it's not right," adds Assis, comparing the response to Casamigos, founded by George Clooney and Rande Gerber in 2013, and 818. (Clooney and Gerber sold Casamigos in 2017 for $1 billion.) "You're destroying a whole industry that is absolutely embedded in the culture of Mexico," he adds. "Forcing a shortage on [the agave] plant because you're just trying to make more money — it's going to leave a sour taste in people's mouth."