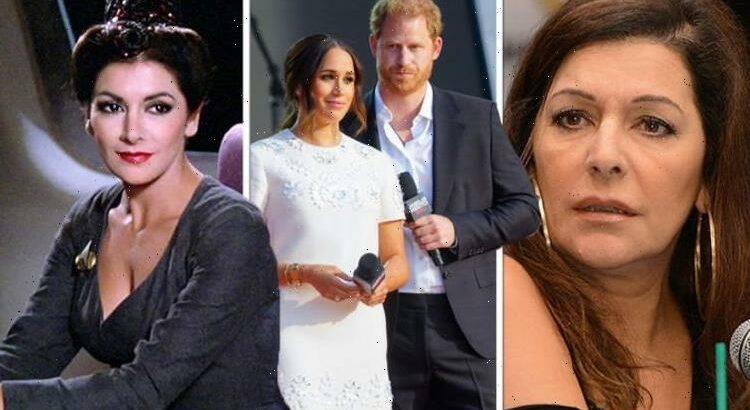 Star Trek: The Next Generation’s fan favourite Marina Sirtis, who played the infamous Deanna Troi, has shared her thoughts on the Duke and Duchess of Sussex. The on-screen star has questioned the couple’s desire to be candid about their life as royals.

The 66-year-old claimed that there is “no way back” for Harry and Meghan after they quit the Royal Family.

In a new interview that aired this week, the Duchess opened up about her family life while living in California with Harry and their two children, son Archie, and daughter Lilibet.

Meghan had a sit down with US chat show host Ellen just eight months after her bombshell interview with Oprah Winfrey.

The Star Trek actress suggested that their first tell-all interview was “ill-advised” and the pair should not have aired their “dirty laundry”.

Marina said she was in agreement with Prince Albert II of Monaco who previously suggested that the royal couple’s Oprah interview did not have to be “laid out in the public sphere”.

She has also claimed that it will be difficult for the Duke and Duchess of Sussex to return as royals.

“I agree with Prince Albert of Monaco. He said, ‘It was a family matter and it should have been kept in the family,'” she commented.

“I don’t agree with people airing their dirty laundry in public. I’ve never done it.”

She continued: “There are things I could say about my family but I’ll say it to them. There’s no reason for me to splash it across your newspaper.”

Marina went on: “I worry now that there is no way back for them,” she explained. “We loved Harry. I loved him.”

She added: “With the Invictus Games, his mental health work, and insisting on going to Afghanistan when he was in the army when he wanted to do his bit.

“I thought he was a legend and then you know… this happens. I’m very disappointed in him.”

Meghan recently sat down with Ellen DeGeneres as she gave a rare insight into her family.

The Duke and Duchess of Sussex relocated to California after they announced they would be stepping down as senior royals.

Meghan shared some insight about their children, Archie and Lilibet, who she has chosen to keep out of the spotlight.

They are yet to share a photo of their daughter, now five months, who was named with a nod to the Queen’s nickname.

The Duchess also revealed that she and Prince Harry are “happy” living in the US.

Marina recently returned to the UK after residing in the US for the past three decades following the death of her husband Michael Lamper in 2019.

The couple first met in 1989 during the filming of Star Trek.

The pair were introduced to each other by their mutual friend, Anna Turkel.

They began dating in the same year but didn’t officially tie the knot until June 1992.