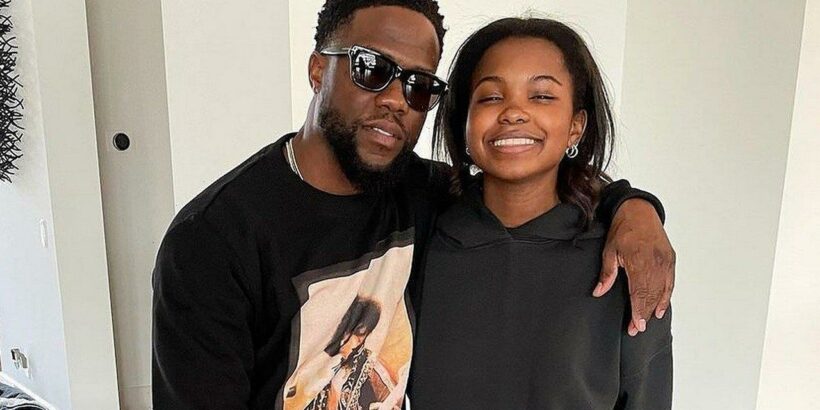 The ‘Jumanji: Welcome to the Jungle’ star talks about fatherhood and fame, claiming his 16-year-old daughter gave him a ‘tough’ time over his cheating scandal.

AceShowbiz -Actor Kevin Hart was given a “tough” time by his teenage daughter after he was caught up in a cheating scandal in 2017.

The “Jumanji: Welcome to the Jungle” star’s reputation took a hit four years ago when he was filmed getting intimate in Las Vegas with a woman other than his second wife, Eniko, who was heavily pregnant with the couple’s first child at the time.

Hart subsequently issued a public apology for his actions, but he admits having to explain himself to Heaven, his now 16-year-old girl from his first marriage, was so much more difficult than he had anticipated.

In a special Father’s Day episode of Jada Pinkett Smith‘s “Red Table Talk” series, Hart told the actress’ husband, Will Smith, “Having a little girl in my life, it’s tough. You don’t realise the impact that your mistakes can truly have.”

“When the kids get involved, it’s a different feeling, a different emotion,” he continued.

“But when your child shows disappointment, shows emotion, shows ‘I don’t understand why?’ and you have to have those conversations, well, now the head drops for the first time, and now you realise there is a different emotional chord that can be pulled that nobody else can touch.”

Addressing the infidelity controversy, he explained, “My daughter touched on that chord. When me and my wife went through what we went through and the whole cheating display, my talk with Heaven, godd**n… That was one like no other.”

Hart revealed Heaven also took it personally when her dad came under fire in late 2018, after old homophobic tweets resurfaced and prompted a backlash, leading the comedian to step down from his hosting gig at the 2019 Oscars.

“When the whole thing started to happen with the LGBTQ+ community and the misconception of me and what I was and what I feel, my daughter was so upset because she couldn’t process how people could think this about her father,” he shared.

“And it was so tough because this was when I started to realise how my fame has an impact on my household. There is a certain level of obliviousness.”

In addition to Heaven, Hart shares son Hendrix, 13, with his ex, Torrei, while he and Eniko are parents to three-year-old son Kenzo, and eight-month-old baby girl Kaori.