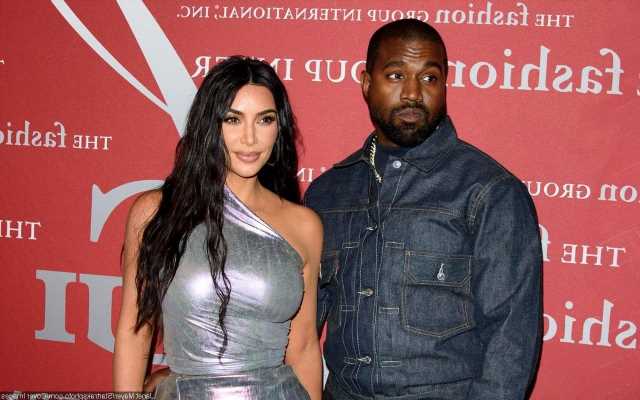 The SKIMS founder and the Yeezy designer look pretty chatty with one another during their son Saint’s flag football game at SoFi Stadium, days after she appeared to ignore him at their son’s soccer game.

AceShowbiz –Kim Kardashian and Kanye West are seemingly putting on a united front for the sake of their children despite their differences. The former spouses appear to be back on speaking terms, days after she denounced his anti-Semitic comments.

The reality TV star and the rapper both showed up for their son Saint’s flag football game at SoFi Stadium in Inglewood, California on Saturday, November 5. In some pictures which have circulated online, the two looked pretty chatty during the game.

The mom of four smiled as she spoke to her former husband alongside their first child North on the sidelines. She kept a considerable amount of distance from the Atlanta native as she kept her arms crossed with another man standing between her and the rapper.

Kim rocked an oversized black sweatshirt, shorts and flip flops, while Ye also cut a casual figure in a white jacket and matching pants with black sneakers. Their 9-year-old daughter and firstborn North, meanwhile, opted for a white T-shirt.

The family cheered on Saint as his Sierra Canyon School team was playing in the season finale of the NFL Flag Football season, where all the leagues come together and play games in the home of the NFL’s Rams and Chargers.

Their cordial sighting comes several weeks after it was reported that Kim had “not spoken to” her ex-husband amid his controversies stemming from his White Lives Matter shirt and his anti-Semitic rants. “Kim has not spoken to Kanye. She is doing her best to co-parent with him in a safe way for her children,” a source told ET Online in mid-October.

Later in the same month, the SKIMS founder denounced the Grammy winner’s anti-Semitic comments as she posted on Twitter, “Hate speech is never OK or excusable. I stand together with the Jewish community and call on the terrible violence and hateful rhetoric towards them to come to an immediate end.”

In late October, Kim seemed to ignore Ye as he got into a heated exchange with a fellow parent at their son Saint’s soccer game in Los Angeles. “The Kardashians” star remained sitting in a lawn chair flanked by security while the “Follow God” spitter was seen arguing with an unidentified woman on the sidelines during the October 29 game.