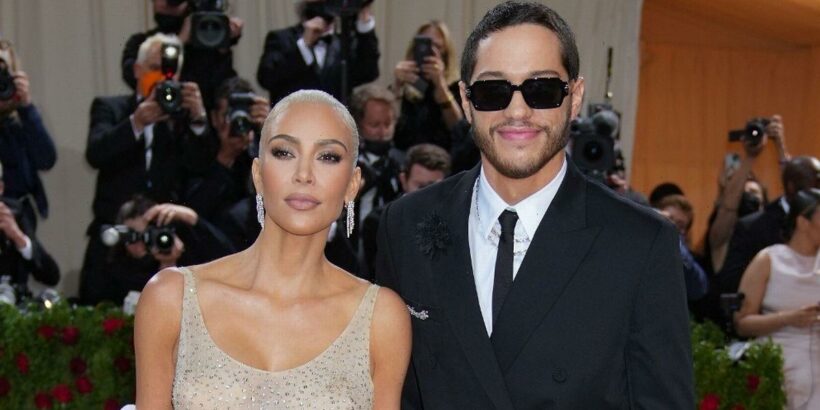 Kim Kardashian appeared to be missing boyfriend Pete Davidson in Italy over the weekend as she shared a sweet post ahead of her sister Kourtney Kardashian's wedding to Travis Barker.

The Keeping Up With The Kardashians star, 41, posted a sweet video about love and being "so proud" followed by a montage of photos of Pete, 28, after his final Saturday Night Live show.

In one video shared, which appeared to be about Pete, a message said: "In case you haven't heard this lately, I love you.

Get exclusive celebrity stories and fabulous photoshoots straight to your inbox with OK!'s daily newsletter.

The message went on: "Consider me your personal little life cheerleader because you're so talented. Gawd you're so cool. Keep being you, I love you so much. Bye."

The couple are said to have been in a relationship since October of last year after the pair met on SNL.

Just recently, it was revealed that Pete finally met Kim's four children, despite the fact that her ex-husband Kanye West vowed he would never meet them.

Kim is currently in Italy for her sister Kourtney's wedding to Travis and the star was seen earlier today enjoying an ice cream as she soaked up the Italian sun.

Travis and Kourtney are gearing up for a lavish wedding in Italy over the weekend, with the couple reportedly set to say "I do" on Sunday 22 May, the Daily Mail reports.

Following their modest courthouse nuptials on 15 May, the couple are said to be marrying in a lavish ceremony in Portofino, Italy, with a host of close family and friends.

This will be the third wedding altogether for Kourtney and Travis after their unofficial Las Vegas elopement last month, as TMZ has reported that the pair have rented out a castle called Castello Brown in the European location.

The Roman-built castle sits on top of a hill and is said to be currently filled with organisers for the reported wedding, which will be a four-day event preceding yet another ceremony in LA when the couple return home.

It comes after Kourtney and her groom Travis were snapped kicking off the celebrations of their wedding in Italy on Friday with a big family dinner.

For all your updates on the Kardashians, sign up to our daily OK! newsletter