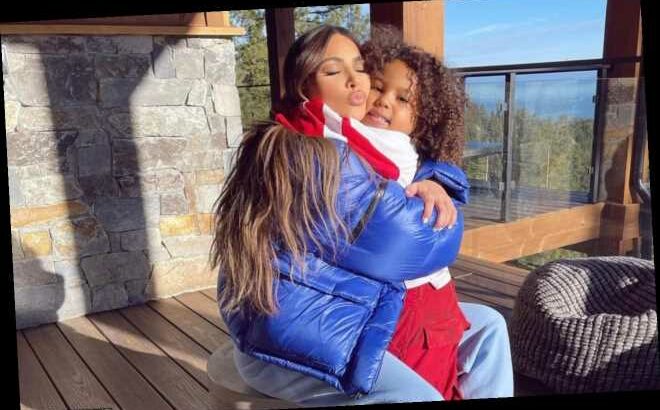 The second child of the reality TV star and her husband Kanye West gives himself a haircut with a pair of kids’ safety scissors as the mother gushes that her little boy ‘still looks cute tho.’

AceShowbiz –Kim Kardashian‘s son Saint has had a haircut mishap right before ringing in 2021. On New Year’s Eve, the second child of the “Keeping Up with the Kardashians” star with her husband Kanye West was unveiled to have cut out a chunk of his hair using a pair of children’s safety scissors.

Flaunting the 5-year-old’s new ‘do was his mom Kim on Thursday, December 31. Turning to her Instagram Story account, she first shared a picture that showed some of the boy’s curly hair next to a pair of red-rimmed scissors. She then added another snap of his son with a blue circle around the area where her boy cut his hair.

Kim Kardashian revealed that her son Saint cut his own hair.

Eliminating the blue circle from Saint’s picture in her third post, the 40-year-old star went on to gush, “Still looks cute tho.” She concluded her social media sharing about her boy’s mishap by putting out a photo of the 5-year-old smiling widely at the camera.

The hair incident post came after Kim celebrated Saint’s fifth birthday in early December 2020. Sharing several pictures of her with her growing boy, she gushed, “My baby Saint turns 5 today. One of my life’s soul mates. Every year I interview my kids and ask them the same exact questions about life.”

“Saint- I can’t wait to see how you’ve grown and how you answers these questions as a 5 year old and show them to you when you’re big,” she added in the tribute. “I know a drive- by party isn’t ideal but it’s our times and you are so excited! You are always so joyful and bring so much joy into my soul every single day. You will always be my baby boy. Enjoy your golden bday this year Sainty! #5onthe5th!!!”

Kim spent time with her children Saint, North, Chicago and Psalm, amid reports that she has been living separately from husband Kanye. A source told E! News that “Kim and Kanye are doing their own thing” while they “focused on the things that are important to them.”

“[Kim] is doing her thing and [Kanye] is doing his. She doesn’t micromanage it or worry about it too much,” the source continued. “She lets him go off and be who he is. It is what it is.”