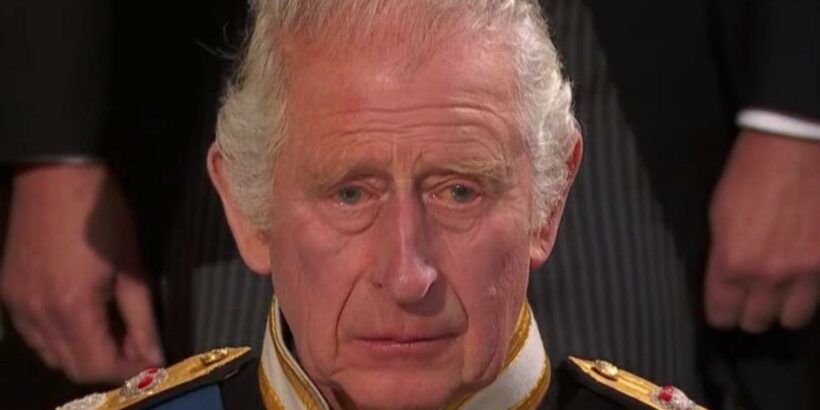 As The Queen’s funeral drew to a close on Monday, crowds of assembled mourners signalled the end of the emotional proceedings by singing God Save The King, a song which very nearly saw King Charles overcome with emotion.

As hundreds of mourners sang the national anthem, King Charles could be seen biting his lip, a move which one body language expert has revealed was to stop the new monarch from crying.

With tears in his eyes, the late Queen ’s eldest son could be seen blinking fiercely and biting his lips as he struggled to remain composed at the conclusion of the service – something Body language expert Judi James was keen to unpick.

Speaking to Metro.co.uk, she said: “For Charles, the anthem seems to be the definitive message that his mother is gone and that he is now King.

“It will be the first few times that he has not sung it and it must be a dramatic and emotional moment."

“Each time he has appeared to struggle with his emotions and this time we can see his eyes looking damp as he sucks his lower lip in to apparently chew it.”

Describing the action as a “self-attack”, Judi suggested that the action might be an attempt to stop the tears from flowing while in so public a place.

Much like his father, Prince Harry also appeared to struggle with the National Anthem, with the Duke of Sussex’s “expression of sadness” seen to “intensify” upon singing the “God Save The King.”

Although the change of lyrics is only a small one, it can “prompt strong emotions” she explained, as it meant the “reality of the Queen’s death” had finally begun to sink in.

Although the change of lyrics is only a small one, it can “prompt strong emotions” she explained, as it meant the “reality of the Queen’s death” had finally begun to sink in.

Following Monday’s formal state funeral in London and a private committal service afterwards at Windsor, King Charles and Queen Consort Camilla have travelled North once again to take a few days to privately grieve and reflect away from the public limelight.

The King was seen leaving Aberdeen airport on Tuesday afternoon after flying in from RAF Northolt in west London, just one day after burying his mother, Queen Elizabeth II.

While the period of mourning has come to an end for the general public, the Royal Family will continue to observe another week of mourning as they come to terms with their loss.