Pantone might have crowned ultra violet as the hue of the moment, but KitchenAid is countering their choice with a stunning pick of their own. While I’m not one to pick sides in a decor debate, I have to admit that KitchenAid’s color of the year is even dreamier than millennial pink, which I honestly didn’t even think was possible. If you’re trying to revamp your home, Birds of Paradise is the shade that’ll totally transform your culinary space into #kitchengoals.

I’ll admit that I had my doubts when I heard that the kitchen decor gods were going up against Pantone with their very own color for 2018. First of all, KitchenAid is a total newbie when it comes to identifying the "it" color that everyone will be flocking to. Plus, Pantone has a pretty solid track record for identifying the tint that’ll be on-brand all year long. For example, take a look at 2016’s Rose Quartz and Serenity, aka pastel pink and baby blue, which still both hold up two years later.

That being said, KitchenAid’s tropical hue is guaranteed to have you thinking of summer through the end of the year, and I’m already obsessed. TBH, I might need to create a whole new Pinterest board revolving around this color, because it’s that pretty. According to the retailer, Birds of Feather is inspired by a South African plant of the same name. After taking one look at the plant, it’s easy to see where it earned its moniker, because the unusual flowers basically look like a group of multi-colored birds in flight.

"Much like the tropical plant, Birds in Paradise ignites one’s desire to be free, travel and explore exotic destinations," KitchenAid’s website reads. "This high gloss, vibrant coral color will bring your kitchen to life and further inspire your culinary creativity." 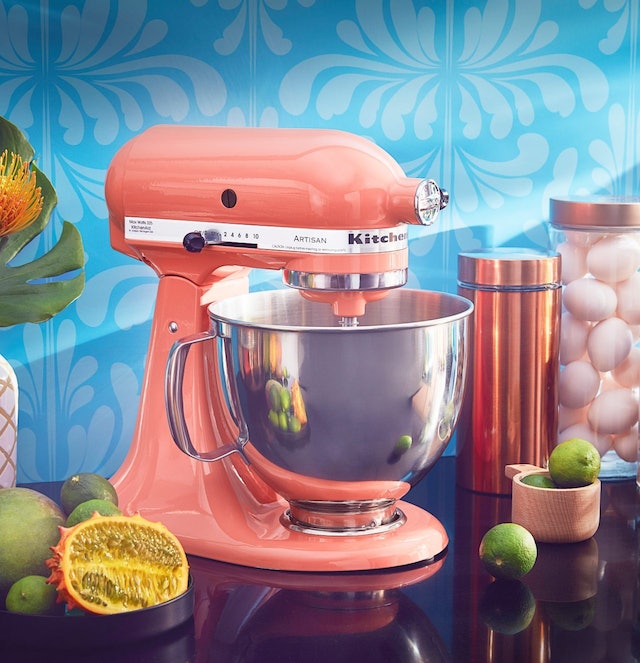 In the market for a mixer? Skip Amazon Prime Day and head to KitchenAid.com instead, because these appliance steals are incredible. Normally retailing for $430, KitchenAid’s Artisan Mini Mixer is a total deal at only $240 right now. On its website, KitchenAid boasts that the mini mixer can make "up to 5 dozen cookies in a single batch" and offers the same power as its regular mixer, so I’d definitely get on that if you’re hoping to whip up any confections this summer. If you still want a traditional 5-Quart Stand Mixer, however, you can still rake in the savings with a reduced price tag of $270 from $470.

Few things evoke a tropical getaway more than a fruity drink in hand, and what better way to make like you’re on vacation all year round than with a blender that’s clad in the hue of the moment? KitchenAid’s 5-Speed Diamond Blender is perfect for blending up countless mojitos and froses all year long, and I’m so in. 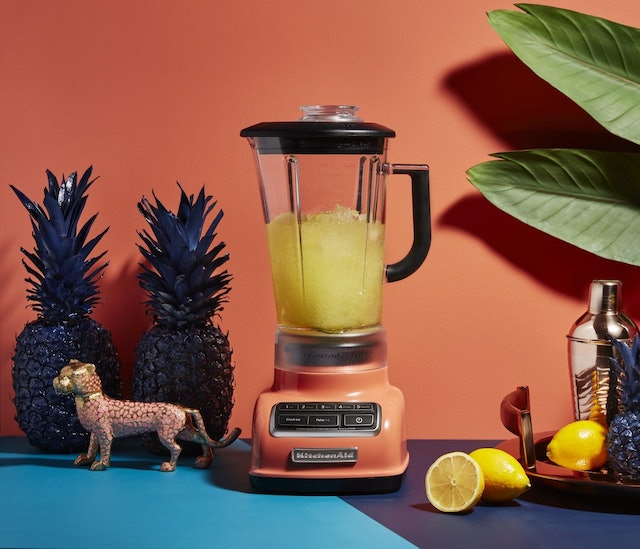 That’s not all. Apparently even more Bird of Paradise merch is reportedly in the works. According to Delish, a KitchenAid Mini Food Processor and Hand Mixer ($50 and $60) will be rolled out this month as part of the Bird of Paradise collection so your kitchen can get the full "it" color treatment before July is over. Sorry Pantone, I have a feeling that this happy hue might have more staying power than ultra violet. It’s totally Instagramable, plus who doesn’t want to feel like they’re dwelling in paradise all year long?